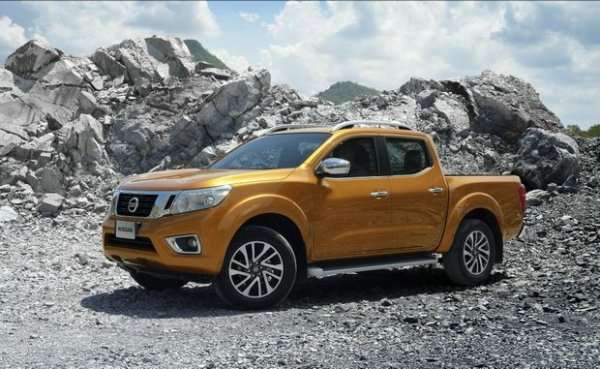 Is the new Nissan Nevara an indication of the Frontier's new look?

The new Nissan Nevara was unveiled, in design theory, for the Latin American and other markets. Given that the Nevara is the near-twin of the Frontier, it's a clear question as to whether the new design will come to North America as well.
Advertisement

The new style for the NP300 Nevara, sold in Latin America and Southeast Asia, has become public. The design is a big update from the current look for the truck and may very well be what the next-generation Frontier looks like as well.

The next-gen Frontier is expected to unveil sometime next year, probably at Detroit or shortly afterwards, though it could come as early as November's Los Angeles show. How much of the new Nevara design (shown above) will translate to the U.S.' Frontier?

Looking at the 2014 model year Forntier versus Nevara, the two trucks are nearly identical. With the exception of powertrain options for their respective markets, the trucks, design-wise, are almost twins. Differences are in the small details and not the overall picture. Seeing both side-by-side, the onlooker would not note any of those differences without long, close scrutiny. Given this, it's safe to assume that the new Nevara design will be the new Frontier's design as well.

The new look for the Nevara is radically updated while retaining key elements of the current-generation Frontier. At the nose, the grille is softened, the lights are elongated, the bezels for the fog lamps are more pronounced and angular, and the bumper fascia is more rounded while keeping the familiar undercut. The hood line is more muscular with a flat center and flaring edges over the fenders in a look similar to the new Canyon from GM. Gone is the front bulge from the fascia into the fenders over the front wheels, replaced by a simpler arch dimple like that found on the Pathfinder and other crossover SUVs. The rake on the rear door windows remains as does the simplicity of the doors themselves. The luggage rack is softened and arched, making it look, frankly, less functional and more showy than before. The flare above the wheel wells at the rear wheels is softened to match the front and the rear tail lamps bulge out further, much like the current-generation Rogue and Juke.

The overall look is more contemporary and modern, but it's likely that many fans of the Frontier will not like it. Most of the "rough" personality of the Frontier has been removed and a more refined, softer look replaces it. The aggressive chrome on the grille, the huge wheel well bulges, the strong fascia and muscular truck bed are no longer present on this new Nevara.

What do you think? Does this new Nevara look like a Frontier that you would want to drive?