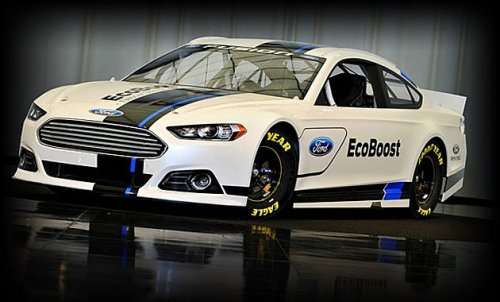 The new, visually distinctive Ford Fusion for NASCAR racing in 2013 was revealed this week and shows how the popular racing circuit will be changing next year.
Advertisement

The new design is part of NASCAR and manufacturer's moves to make the race cars more distinguishable from one another in an effort to engender more brand competition and loyalty amongst fans. The Fusion is the first of these new designs to be unveiled.

For several years, race vehicles in NASCAR have been basically the same. While the engineering underneath the body shell might be from different manufacturers and designers, the visual components of the cars themselves were all basically the same blocky exterior with only a modicum of decals to differentiate a Ford from a Chevrolet or a Toyota. Most of the time, the decals weren't enough and the manufacturers had to actually stencil on the model name of the car that the racer was supposed to represent.

Until now, that is.

The uniformity of NASCAR race design is going to go out the window in 2013. America's most popular racing forum and the manufacturers who participate (Ford, Dodge, Chevrolet, and Toyota) are giving the racetrack's denizens a big makeover. Gone will be the boring sameness of the cars and in will come visually distinctive and more true to model designs for the race cars.

The unveiled Ford Fusion NASCAR is the first of the group to be shown. It looks like a Ford Fusion, though it definitely won't drive like one. The grille work, hood slope, more rounded rear end, and the window cuts look much more like a production Fusion than the old design, which resembled a Cub Scout's pinewood derby racer more than it did a real car.

Chevrolet, Dodge and Toyota are expected to unveil their new NASCAR designs in the coming weeks, likely in a way that coincides with the unveiling of the 2013 model year designs for the cars their racers are based on.

Although, for racing safety, competition, and rule-following purposes, the NASCAR editions of the cars have little in common with their street-legal production kin, they are largely meant as promotional tools for those consumer-ready cars. By tying them together more closely through visual design, the manufacturers and racing teams hope to build better recognition for and help build fan loyalty to the brands and models.

Whatever their goals, the new looks will definitely be an improvement on the track. Until now, the only way to distinguish drivers and cars was by the decals they sported or the numbers on their sides. Now, a Ford will be a Ford and a Dodge will be a Dodge.

For Some Former Daimler Managers Daimler Is Authority, While Tesla Is Like a Startup
How Daimler Unintentionally Subsidizes Tesla Giga Berlin
END_OF_DOCUMENT_TOKEN_TO_BE_REPLACED