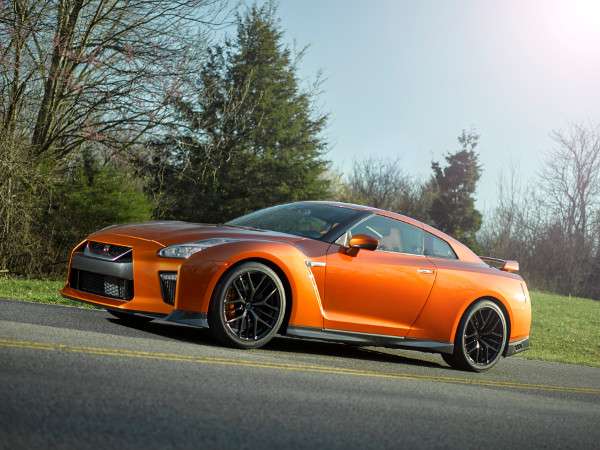 A significant facelift and powertrain upgrade came to New York in the 2017 GT-R, Nissan's halo supercar. So did it's hot new body paint option.
Advertisement

The drag strip dominating, Nurburgring destroying, Godzilla of a supercar, the Nissan GT-R, just got big upgrades for the 2017 model year. Sporting the most significant changes to the car since its debut in 2007, the new Nissan GT-R is more powerful and better-looking than ever before.

The 2017 GT-R will enter showrooms this summer. Daniele Schillaci, executive vice president, Global Marketing & Sales, Nissan Motor Co., Ltd. stated: "This new GT-R is the most advanced, most refined and most progressive sports car that Nissan has ever built. And that is saying a lot."

The front grille gets some changes, along with the hood above it, to accentuate the V-motion grille that dominates the Nissan design language today. The hood's change also hides other upgrades, which include better airflow management and improved stiffening for high speed, performance driving.

Under that hood, more improvements were made to the legendary Godzilla engine. These hand-built, precision V6s see a 20 horsepower increase to 565 hp. This boost also brings a broader, more useful torque band for better acceleration and response at speed.

The 2017 model will feature new materials and interior looks for the top-shelf Premium model as well.

Panasonic Updates Profit Forecast, Noting How Much Tesla Batteries Help The Jump
2022 Porsche 911 GT3 Laps Nurburgring in 7:04 With Journalist Behind The Wheel
END_OF_DOCUMENT_TOKEN_TO_BE_REPLACED