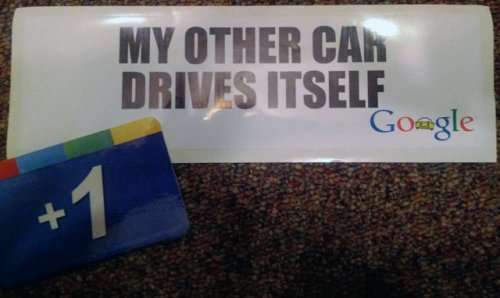 The State of Nevada's Department of Motor Vehicles and its Legislative Commission have approved regulations that allow self-driving vehicles to operate on the state's roadways, making it the first state to gamble on this future technology.
Advertisement

Some might think that Nevada lawmakers are just wasting time passing a lot of laws for no reason. Why would they be drafting and passing laws about something like this? For the same reason they draft laws about anything, honestly. Because they can. But that's politics, not automotive technology.

Turns out, Google has been lobbying pretty hard in Nevada to get this passed. The company convinced the legislature to pass a bill requiring the state's DMV to draft rules for acceptance. The DMV has done so and those rules have been approved by the Legislative Commission that was waiting for them. So now, legally, you can operate a self-driving car in Nevada provided you register it as such with the state's DMV (who then issue red license plates to denote the car's status). The catch? Right now it's for testing and demonstration purposes and not for public consumption.

Other states may soon be following suit.

Why Google? Because Google has been working on self-driving cars for at least three years now.

Wait.. Self-Driving Cars?
If you're of Generation X or thereabouts, you no doubt remember Kit from the television show Knight Rider starring David Hasselhoff (he's big in Germany right now). There were a handful of cool shows on the air in those days, but few were as imagination-stirring for the car lover as Knight Rider. Well, Google has been working on something like that, a self-driving car system that controls the vehicle entirely with no human input. While the Toyota Prius cars they use aren't as cool looking at Kit was, they are almost as sophisticated.

The oscillating red light on the grille is noticeably missing from the test bed Prii, but when Google went public with the fact that they were testing this idea on public roads (back in 2010), they'd already logged 160,000 miles without an incident. The problem? Doing those tests on public roadways was not exactly legal. But hey, everything in California is illegal anyway.

Google isn't the only one, either, just the most public.

Both Audi and Volkswagen have also been working on similar technologies. Audi climbed Pikes Peak in Colorado with their self-driving unit - named Shelley, in honor of the first woman to win at Pikes Peak, Michele Mouton, who drove an Audi - in 2010 with noticeably less fanfare. Despite the fact that the Robotic Car is a much cooler-looking TTS and it competed in a race not just driving down a freeway. That car was developed in conjunction with Volkswagen at their Stanford University Electronic s Research Lab.

So while the self-driving car might not be a reality in the common marketplace for some time (for one thing, a lot of red tape and changes in legislation would be required), the cars are out there and will eventually become something we see more regularly.

David Herron wrote on February 19, 2012 - 6:23pm Permalink
"Doing those tests on public roadways was not exactly legal. But hey, everything in California is illegal anyway." Um, that's not quite correct, and is unfair to California. Googles self-driving car program always has a human "supervisor" on-board monitoring the car and ready to take over at any time. That's the first bit of legality. The second bit of legality is that US precedent is that things which aren't explicitly outlawed are generally deemed to not be prohibited. Or put another way, the only prohibited things are those that are explicitly outlawed. Existing traffic law assumes a human is going to be driving, and the lawmakers a hundred years ago no doubt hadn't the foggiest idea that anybody could ever develop a self driving car, and didn't write the regulations to cover this case.
Aaron Turpen wrote on February 20, 2012 - 6:11am Permalink
Sorry if my joke about California offends anyone. But hey, to the rest of the country, California is the place where they can't seem to make enough new laws and just keep piling on more. As for your legal analysis, that's probably right. Legal forums were abuzz with thoughts on that a couple of years ago. This came to a head in August last year when one of the autonomous Google cars was in an accident (which Google says was human-, not computer-caused). Whether or not it was the computer or not is another question, since the general thought from attorneys was that were it deemed a computer was driving, huge civil ramifications would likely result.