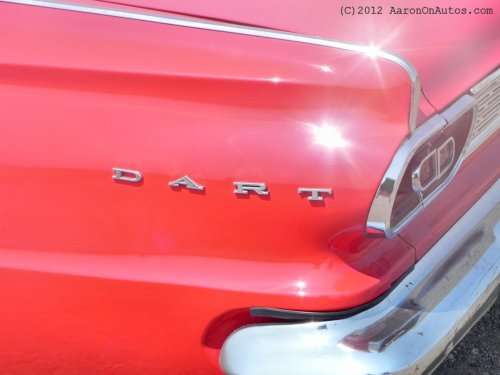 Looking Forward to the Past in a Dodge Dart

When the 2013 Dodge Dart returns the Dart name to the Chrysler lineup, it will have a lot to live up to. Will it meet the challenge?
Advertisement

Soon, we will see the new Dodge Darts plying the roads of America and may, occasionally, see a 2013 model cruising along next to a classic like the 1965 Dodge Dart this lucky reporter was able to drive along the endless highways of Wyoming recently. The question is, will the new Dart live up to the powerful precedent of smooth dependability and high economy of the original "compact American car" of the mid-1960s?

Darting Back in Time
Chrysler's Dodge brand introduced the Dart back in 1960 as a replacement for the aging Lancer model when Plymouth split from the Chrysler-Dodge network and the company needed a smaller-car competitor to fill the gap left by the split.

The first generation entered the market in 1960 as a largely unremarkable "not quite as large as the others" car, still carrying on the land yacht tradition of the 1950s. It was, however, a huge success and started an internal war between Chrysler's Dodge and Plymouth divisions, though it caused some problems for Dodge as well, who saw many of its mid-priced cars like the Matador and the Polara flag in sales as the Dart stole their customers.

A restyle in 1961 was a disaster, however, killing sales with its outdated looks copied from the now-discontinued Polara. A second-generation was introduced in 1962, restyling the car completely, cutting the car's size to compete with the Chevy II Nova and Ford Falcon, but failed to please either dealers or their customers, though this generation saw many improvements, such as a unibody platform and torsion-bar front suspension and asymmetric leaf springs, creating one of the stablest maneuvering platforms of the period. Other factory customs added in 1962 included a Ramcharger version of the Dart with a huge 8-cylinder engine pumping out 415 horsepower and aimed squarely at sanctioned drag racing, where it immediately broke performance records.

It wasn't until the third generation, introduced in 1963, however, that the Dart really fell into stride to become one of the best-selling compact cars in American history. By 1965, everything about the car had been perfected for the times. While things would change in subsequent years through to the model's end in 1976 (and new rebirth in 2013), most of the underpinnings that made the 1965 Dart great would remain, building a legend of comfort and dependability that few other American-made cars could meet – especially considering the extremely high fuel economy the Dart offered, something it did well before anyone though of "economical" and "fuel efficient" as being cool.

The 1965 Dodge Dart
In 1963, Dodge did three things to ensure the Dart's name would forever be etched into automotive history:

1) They dropped the Lancer name and rebranded it as the Dodge Dart.
2) They configured the wheelbase to an optimal 111 inches (up from 106.5 inches, which was too short to give good handling on this platform).
3) They offered five model options with three trim levels.

In 1965, the Dart was offered as a 2-door or 4-door sedan, a 2-door hardtop coupe, a station wagon, and a convertible. Trim levels included a 170, 270, and premium GT (available only in the 2-door hardtop coupe or convertible). Transmissions included a 3-speed manual, 4-speed manual, and a Torqueflite automatic transmission. For real history buffs, the Dodge Dart Charger offered in limited numbers that year were yellow Dart GT hardtops with black interiors and a huge Commando 273 engine. This became the legendary Dodge Charger in 1966, one of the greatest pony cars ever made.

Our example 1965 Dodge Dart GT convertible, to which the new 2013 Dart should be compared, is a high benchmark to meet. Owned by Rob Stevens of the Bluffs Insurance Agency in Pine Bluffs, Wyoming, this car has a 225 cubic inch slant-six putting out 235 horsepower and driving a 4-speed manual transmission. Options that year included an unpopular 170 cubic inch engine (upgrading to the 225 was only $50 more) and a large 273 cubic inch LA V8 putting out 180bhp. In our configuration of the 225 GT with a 4-speed manual, the Dart is capable of 30 miles to the gallon on the highway and routinely does so, even after 47 years on the road.

Stevens' Dart is completely original with the exception of the paint and vinyl cover for the retracted convertible top. Yes, right down to the shock absorbers (factory-installed originals), vinyl seating, AM/FM radio (first year FM was offered), and black plastic gearshift knob. Rob is so careful about keeping it original, that when the washer reservoir for the windshield wipers broke and could not be repaired, he did not replace it because he "couldn't find one from 1965."

Yet he happily handed the keys to me and offered something more rare than vintage wine. To get a little personal, I have driven many, many cars. I've been behind the wheel of cars whose price tag is more than most people's homes, ran the pedals of some of the most beautiful examples of modern engineering made, and pulled the shifter on big rigs and tractor-trailers of many descriptions, but cruising on an open highway behind the wheel of this example of a true American classic from 1965 was beyond compare.

The ride is akin to all of the great vehicles of this time period: thick, cushy, and above all – comfortable. At a stand still, the Dart, like other cars of the time, "breathes" as it idles, moving ever so slightly as the engine purrs. But the Dart is not like the Impalas, the Novas, the GTOs, the Riveras, and so on of the time. It was a true compact car. It drives happily down the road with that bulletproof slant-six that the world enjoyed for more than a decade until Iaccoca, to his later deep regret, discontinued the car in 1976. Sitting behind the wheel of Rob's 1965 Dodge Dart convertible GT, I realized that eco-driving comes naturally in a car made for it. No gadgets, innovative displays, or funky lighting on the dash is required if the car just does what we humans who love driving naturally want to do: get up to speed and just cruise. Somewhere around 60 miles per hour, the Dart just quietly says "this is a good spot" and glides with no peddle pressure or hard-knuckle steering required. It's here that you sit a little more comfortably, smile a little wider, put your arm on the door sill or around your best girl and just drift along. It's perfect.

The little slant-six puts out plenty of get-up when you ask it to, but at cruising speed, it becomes amazingly quiet and only the sound of the wind in your hair and the tires on the road sooth you as you sail along the blacktop. It's something that cannot be easily described to those who haven't experienced it. In today's "eco" models, many of which I've driven, this is just not a standard feature. The Chevrolet Volt, Nissan Leaf, Toyota Prius, and other compact "efficiency cars" can't live up to this love of the road that the 1965 Dart shares so easily with its driver.

Onward to 2013
Will the 2013 Dodge Dart live up to this and meet the near-rapture of its 1965 predecessor? Is it possible for a modern car to achieve this? I'm sure Dodge will try and it's possible they'll succeed.

Whether they do or not, there will always be the lucky ones like Rob Stevens who can sit behind the wheel of their 1965 Dart 225s and share a love of the road with a machine that feels the same way.