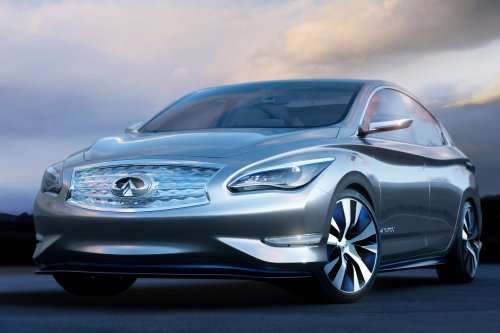 The New York International Auto Show (NYIAS) promised a lot of great unveils this year, but the Infiniti LE Concept may be the best yet, featuring not only zero emissions driving with luxurious style, but hands-free powering via self-parking, inductive charging - because luxury shouldn't require wires and plugs.
Advertisement

Unveiled today, the Infiniti LE Concept features the styling of the latest the Nissan luxury brand has been promoting, including a now-signature rear post "wave." The LE will be the brand's first zero emissions, battery electric car, drawing heavily on the Nissan Leaf while showcasing new technologies that Infiniti is introducing.

Shown today at the 2012 New York International Auto Show, the LE Concept is said to be a close-to-production concept that could hit showrooms as early as 2014. It features all of the luxury that Infiniti customers have come to expect, but in a zero emissions platform with a world-introduction inductive charging option new to Nissan's brand.

The key features of the sedan include its battery electric operation using leading-edge lithium-ion battery technology; Intelligent Park Assist to help not only park the car, but also to align it automatically with the charge port for optimum charging; and an inductive charging system that requires no wires or plugs and that can be installed into the floor of most any garage or parking space where the LE would be parked.

Nissan has become the world's leader in all-electric car sales thanks to the Leaf and the company hopes to build on that by including their luxury brand in the mix, offering a higher-end, more user-friendly and luxurious offering through Infiniti. The car was designed from the ground up as a luxury vehicle, side-stepping the usual offering for electrification, which often adds the luxury to the car after the fact.

It's a well-styled sedan with the brand's signature double-arched grille and aforementioned crescent "wave" rear pillars. A more swooping flow along the car as well as side bevels meant to both aid aerodynamics and hide door handles keeps the 186.4-inch sedan in a low-drag build. Even the wheels have been aerodynamically-enhanced for better performance, adding to the standard low rolling resistance tires.

The 24 kilowatt hour battery pack is expected to give a 100 mile range, though the EPA may change that if and when testing occurs. The front-wheel-driven Infiniti LE Concept includes a 134 horsepower electric motor (240 lb-feet torque), a significant step up from the Leaf's 107hp, and regenerative braking. The batteries are slung along the floor as in the Leaf, providing a low center of gravity for optimum handling and performance.

Of course, luxury is all about look, feel, and convenience. The LE definitely has the look of a luxury sedan with its beautiful lines and soft interior which continues the double-swoop exterior looks indicative of Infiniti. The latest in advanced driver assist and safety features are included as are connectivity and infotainment options. LED and LCD touch screens create the user experience while a sculpted shift knob selects drive options for the single-gear electric.

Continuing the convenience factor, the Infiniti LE Concept makes zero emissions easy by adding Intelligent Park Assist that uses various safety and sensory components to help park the car as well as align it with its charging port, which is mounted on the floor of the garage or parking space. The inductive charging system means that no plugs or wires are needed, the car automatically begins charging when parked over the charger, whether it be for five minutes or five hours. The charging port for the car is located underneath the trunk in the rear of the vehicle and a blue LED light strip on the rear bumper indicates charging is taking place.

Although some aspects of the LE Concept may change, Infiniti says that this is a near-production prototype, so most of its technology and design cues are likely to stay intact. It will be built at the company's Tennessee plant where the Leaf is currently produced and could be in showrooms in as little as two years, Nissan says.