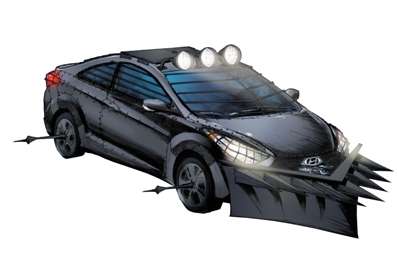 Hyundai will be attending this year's Comic-Con in San Diego and will be bringing a tribute to Robert Kirkman's The Walking Dead graphic novels and comics for their 100th issue.
Advertisement

Normally, the term "walking dead" is probably not one that an automaker would want associated with their vehicles. In Hyundai's case, however, it's a tribute to one of the longest-running and most popular comics in recent history.

On July 12, comic fans from all over the world will descend upon San Diego, California to pay tribute to (and get their hands on) the 100th issue of The Walking Dead issue. When they do so at the Future US booth, they'll be treated to something that could be hotter than that collectible 100th issue.. A Walking Dead tribute car provided by Hyundai (an Elantra Coupe), designed by Robert Kirkman and fabricated by Design Craft.

The drawing at right is Kirkman's sketch for the vehicle, but the real deal will not be seen publicly until Comic-Con. Uber-fans of The Walking Dead take note: Hyundai and Skybound (Dead's publisher) will be giving away a special Hyundai Elantra GT wrapped in a skin made of the cover of the 100th issue (drawn by Charlie Adlard) to a lucky Con attendee.

“The Hyundai Undead program allows us to interact with hundreds of thousands of film, comic, TV and video game fans during this summer’s ultimate pop culture event,” said Steve Shannon, vice president of Marketing, Hyundai Motor America. “We can’t wait to unveil our custom Elantra Coupe Zombie Survival Machine, the ultimate car for The Walking Dead fans and anyone who wants to survive a zombie apocalypse.”

Design features for the custom Zombie Survival Machine include a front-end custom plow/cow catcher with spikes, slatted armored window covers, an electric rear trunk for holding weapons, all-terrain/rally tires, interior weapons storage compartments, a CB radio with a PA system, and a roof hatch/sunroof to allow passengers to stand up to shoot at zombies.

To win the Elantra GT wrapped in artist Charlie Adlard's 100th issue cover of The Walking Dead, fans can enter the sweepstakes for the drawing at HyundaiUndead.com, at the Skybound booth in San Diego, or the Future booth at the Comic-Con.

Here is video from HyundaiUndead.com featuring Kirkman as he describes the car's design and his thoughts about them: