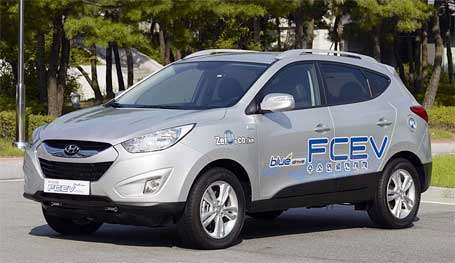 Hyundai to roll out 1,000 hydrogen cars this year

Hyundai promised production-level hydrogen fuel cell vehicles by 2013 and is keeping that promise, planning on rolling out the first thousand late this year.
Advertisement

Most major manufacturers are planning fuel cell vehicle rollouts in limited production numbers in 2015, including Toyota, Honda, and possibly General Motors. Hyundai announced last year that it would one-up those rivals by putting their fuel cell vehicle into production by 2013.

The Korean automaker plans to make good on that promise by rolling out the first thousand hydrogen fuel cell vehicles (HFCV) late this year for 2013 release. Most of these will not be put on the road in Korea or North America, but in Europe, where hydrogen has a much higher level of acceptance.

The vehicle of choice will be the Tucson ix, based on the small crossover of the same name, with a sticker price of $88,550 before incentives. Hyundai's goal is to have their fuel cell vehicles selling for under $50,000 by 2015, putting them well ahead of the curve as the only other company to announce possible pricing for their FCVs is Toyota, who plans to have theirs at that level on release (likely at an initial loss, as with the Prius in the late 1990s). Hyundai plans to be selling 10,000 units per year by 2015.

Recently, Hyundai won accolades (of a sort) for their hydrogen fuel cell prototypes when they were selected by Denmark for its FCEV government project, with 10 Tucson ix models going on the road and beating out European automakers for the privilege. Several Euro countries including Denmark, Germany, the Netherlands, and others have been working hard to put together a "hydrogen highway" of infrastructure for H2 fueling. Several automakers, including BMW, Honda, Hyundai, Mazda, and Toyota have been working with those governments to test those highways.

The European hydrogen revolution goes beyond cars and includes buses and other heavy vehicles as well.

While Hyundai has not given details about where these first thousand hydrogen fuel cell vehicles will land, it's almost assured that most will be sent to Europe. Any that come to North America are likely to release (in limited numbers) in the Los Angeles area, where many HFCV prototypes including the Honda FCX Clarity have been testing.

Hydrogen has its naysayers, to which the only answer is a question: "If it's so bad, why is nearly every automaker in the world working on fuel cell cars then? And without anywhere near the government incentives given for working with electrics?" Obviously, there's something to this whole hydrogen thing.