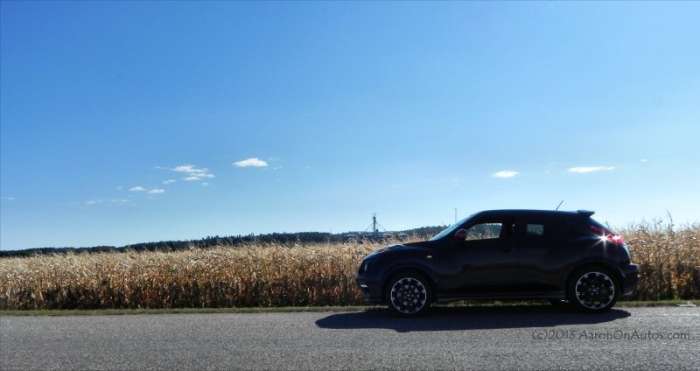 The new Juke NISMO RS will debut at the Los Angeles Auto Show in a mysterious package of performance that is a tier above the current Juke NISMO. With little to go on, we speculate about what it could be regardless.
Advertisement

Nissan has confirmed that the 2014 Juke NISMO RS will debut at the Los Angeles Auto Show next month, but has given little detail as to what, exactly, the "RS" package will be. We do know a few things about the Nissan lineup and the Juke itself, so we can make a few guesses.

The Juke NISMO RS will definitely be a higher-performance version than the current NISMO package, but not as ridiculously mortifying as the physics-bending Juke R shown off last year was. The current Juke NISMO is already impressive, with its light vehicle weight coupled to 197 horsepower and 184 lb-ft of torque from the little 1.6-liter, four-cylinder direct-injected engine it sports. The way we see it, Nissan has a couple of options to raise the bar for the Juke NISMO RS to raise it up from the NISMO, but without breaking the bank and flying into that stratospheric cost the Juke R had at $650,000.

Most of that will be in power output boosting, obviously, and Nissan has a few options for that. First, improved turbos and some creative engineering might raise the horses coming out of that little four as far as 210 hp. This would be pushing that little engine to its limits, however, and would create some possible long-term reliability issues. A better choice would be to move to a larger displacement instead.

The crazy Juke R was able to somehow accommodate the bigger V6 housed in the now-legendary Nissan GT-R. To get that six from the GT-R into the Juke, Nissan had to make a lot of modifications, but putting in another four-cylinder would not require nearly as much cutting. Nissan has larger four-cylinders they could use, like the slightly larger 1.8-liter GDI in the MR engine series. There is a 2.0-liter version of this engine as well. If a small six can be fitted, then the VQ series has a 2.0- and 2.3-liter option as well as a 2.5L.

Another option might be a complete left-field surprise, though. What if the 2014 Juke NISMO RS features a diesel engine instead? Nissan has more than a few four-cylinder diesel engines in its lineup in Europe and Japan, so that's not inconceivable. Ranging from 1.6-liters to over 2 liters, there are a lot of them that could be easily converted for the American market if Nissan wanted to do it. This would improve torque curves for performance and would add some weight to the front end, which may improve handling in the FWD NISMO option.

Finally, the Juke NISMO RS could be the Juked out version of the promised entry-level sports car based on the 240SX of the '80s and '90s that Nissan has promised to reveal at the upcoming Tokyo Motor Show. We'll have more on that in another article coming soon.