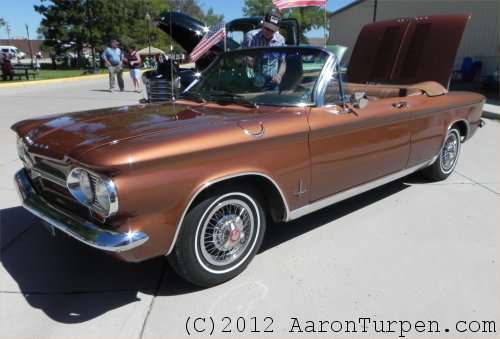 A history lesson courtesy of a 1964 Chevrolet Corvair

Often treated as a questionable classic that received a bad name it didn't deserve, the Corvair was a forward-thinking car produced in the 1960s; and after seeing a 1964 model, fully restored, and speaking with its owner, a few things come to light about this overlooked beauty.
Advertisement

The Corvair got its name from the Corvette, whose 1954 fastback show car originally held this moniker. It was later revived as a new title for a car to be produced as a 1960 model in order to compete with popular small, lightweight imports and domestic compacts. At a town parade and classic car show in Burns, Wyoming, I met with Dale Sergeant, who owns a 1964 Corvair that has been lovingly restored to very close to its original condition.

The 2-door convertible immediately caught my eye during the town's parade procession as one of only three unusual classics to be driving by (the others being a 1963 Studebaker Avanti and a 1970 Dodge Challenger R/T 440). After the parade and once our toddlers had been satiated with parade candy and juice boxes, I left my family under a shade tree and headed over to the classic cars to find the owners of these great vehicles. It didn't take long as the first car in the classic lineup for display along Main Street was the Corvair.

I began snapping photos of this beautiful machine when I was approached by an unassuming older man who I'd thought was just another admirer of the car. Turns out, he is such an admirer that he owns it - along with the 1950 Chevrolet 3600 pickup truck that was next to it. He introduced himself and we started talking. I learned a lot about the Corvair - both the one in front of me and the car in general. Dale Sergeant turned that classic car into a history lesson while including a lot of personal connection to boot.

For someone like me, who was born after this car had seen its production run, my perceptions of it were heavily tainted by Ralph Nader's Unsafe At Any Speed commentary on the Corvair. Comments, it turns out, that were wholly undeserved and completely disavowed by a National Highway Traffic Safety Administration study, but which still often go unchecked even 47 years later. It was Nader's claim that the Corvair was "the leading candidate for the un-safest-car title" that ultimately destroyed sales and caused the model line to be discontinued in 1969.

The Poor Man's Porsche was introduced in 1960 in two variants and then quickly modified by Chevrolet, who learned that base-level models were not of interest to most consumers and that the "Chevy II" options in the Monza coupe were the way to go. The Corvair Monza was, in 1962, the first production automobile to include a turbocharger as a factory option. As design tweaks progressed, the Corvair remained largely unchanged until 1965, with the convertible 1964 model before me as the pinnacle of what the Corvair line had to offer in that first generation.

That 1964 model year, some big engineering changes were made to the underpinnings of the Corvair. These included a larger engine displacement and accompanying power output, an upgrade to the innovative swing axle rear suspension and a front anti-roll bar. These changes went with the already forward-thinking build of the Corvair, with its rear-mounted engine (competing with the Germans) that was air-cooled and mated to a manual transmission (included in this 1964 specimen) or an optional automatic.

Various versions of the Corvair were presented as concepts, including a Tourismo racer called the Corvair Monza GT and a sister Monza SS Spyder in 1963 and an electric model in 1964 called the Electrovair, followed by the Electrovair II in 1966. Production Corvairs included a pickup truck (Rampside), station wagon (early models called the Corvair Lakewood), van (Corvair Greenbrier Sportswagon), and the various Monza and standard coupe and convertibles.

The 1965 model introduced the second-generation Corvair with a body style taken almost directly from the Stingray as a sort of mashup with the Buick Riviera. This was part of an overall Chevrolet styling trend now called "Coke bottle styling." Underneath the new body, though, most of the underpinnings that made the Corvair what it was (and still is) remained. Inside the passenger's compartment, however, a lot of technology upgrades in terms of comfort, usability, and in the instrument cluster were added.

The press kits announcing the new Corvair were met with enthusiasm and Car and Driver's immortal David E. Davis, Jr. said "And it is here too, that we have to go on record and say that the Corvair is — in our opinion — the most important new car of the entire crop of '65 models, and the most beautiful car to appear in this country since before World War II." "The new rear suspension, the new softer spring rates in front, the bigger brakes, the addition of some more power, all these factors had us driving around like idiots — zooming around the handling loop dragging with each other, standing on the brakes — until we had to reluctantly turn the car over to some other impatient journalist." (Car & Driver, October 1964)

Because of the political enthusiasm of one man, the innovative Corvair was shut down and a third generation was never produced. The car, though misunderstood, is one of the classics of American engineering. It was a response to market forces that could only have been made during the engineering-crazed and fast-paced 1960s. Ten years later, most of that energy had begun to sap from the American automotive industry as vehicle manufacturers became more bureaucratic and less innovative.

Speaking with Mr. Sergeant (pictured above with his beauty) about his 1964 Chevrolet Corvair convertible made me realize that this model line stands as a prime example of the industrial know-how of 1960s America. It was a beautiful car, inside and out, that was ultimately destroyed by politics. A fitting paradigm model for the rest of our nation and a powerful history lesson we should not ignore.

Dead Presidents wrote on June 11, 2012 - 2:36pm Permalink
You haven't lived until you've driven a top heavy Greebrier into a clover leaf at high speed...
Simon R Bernstein wrote on February 10, 2020 - 2:17am Permalink
It was Murphy's Law for this unsung classic. Regarding the first generation the bean counters caused a lot of the grief for the Corvair. For under $10 per car the Corvair would have had a part which would negate the driveability and safety issues inviting Ralph Nadir to make the Corvair the goat of early 60's American Cars. Flash forward to generation 2. Due to anti smog requirements, GM had to delete air conditioning from the options list just as factory AC was becoming common even on smaller and sportier vehicles. Just some poor planning and lousy timing.IMHO. Who knows, a third and even 4th.generation Corvair could have been a positive game changer for GM and the US auto industry. With the Corvair living on, we could have been spared from such notorious rides as the Vega and Chevette.