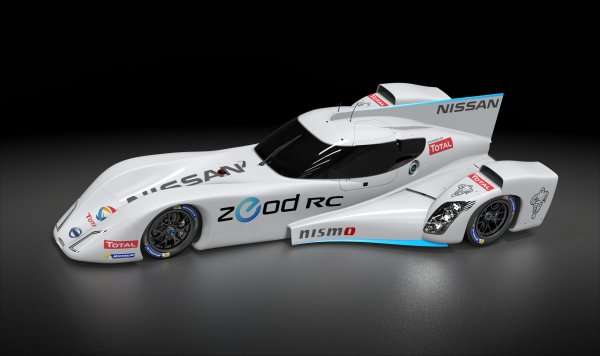 A ground-breaking new engine from Nissan's research and development team will be the powerplant inside the new ZEOD RC race car for Le Mans. Learn about this engine and why it's so extraordinary.
Advertisement

Nissan has unveiled the gasoline engine that will be used in the new ZEOD RC race car, a Garage 56 entry at Le Mans this year. This engine is revolutionary in several ways, not the least of which are the three cylinders pumping out an amazing 400 horsepower.

The ZEOD RC is an experimental design taken from the successful DeltaWing project undertaken previously. The ZEOD RC becomes a sort of next-generation idea behind that project in appearance and spirit, if not officially. While a few things have changed to accommodate new track rules for Le Mans, most of the real updates to the vehicle are underneath its advanced carbon shell.

It's already been known that the ZEOD RC gets its name from the fact that it will become the first entry at Le Mans to complete a lap of the Circuit de la Sarthe on electric power alone. That will happen this June, with the car expected to do at least one lap in all-electric mode per fuel stint in the race.

Powering the car for the rest of the race is this little 1.5-liter, 3-cylinder turbocharged three-cylinder engine that packs more power in its tiny little package than many engines twice its size do with triple the space.

The 1.5L Nissan DIG-T R engine produces 300Nm of torque and 400 horsepower, but weighs only 88 pounds and is small enough for one man to pick it up and carry it. In fact, it is small enough to fit in the carry-on rack of most airliners. By the way, that 400 hp inside 88 pounds gives the engine another astonishing figure that will amaze most sports car enthusiasts: 10 horsepower per kilogram. That's a better power:weight ratio than the current-generation FIA Formula One racers will have.

The engine was developed within the parameters of Nissan's goal of downsizing everything possible on the ZEOD RC in order to maximize its efficiency and allow the use of a largely unaltered Nissan LEAF powertrain as its electric propulsion system.

Much of that engine downsizing came from an interesting source: lubricant maker Total, Nissan's French partner in this engine's development. The fuel and lubricants to be used in the ZEOD RC are specifically calibrated for the car and are a big reason that the engine can be so small and still operate at the demanding temperatures and output expected of a race car of Le Mans caliber - especially a little turbocharged beauty like this that winds up to 7,500 RPM. The Automobile Club de l'Ouest sanctions the Garage 56 experimental entries in order to allow their development for future racing. Nissan expects to take this little engine as well as the EV powertrain underpinning the ZEOD RC and build a fully-fledged, competitive Formula One car for 2015 out of what they learn with this 2014 season's experiments.

Parks McCants wrote on January 30, 2014 - 4:16pm Permalink
Nissan fan or not, this is an incredible development. The applications for a motor of this size to power output is approaching unlimited. I'm thinking experimental turbo prop ultra-light aircraft. Thanks for doing the research required for the publication of this timely article.
Parks McCants wrote on January 30, 2014 - 4:26pm Permalink
After watching the video, I'm having a tough time wrapping my mind around the torque and power output of this micro -engine. I've wrenched on everything from 2 stroke rotary valve motorcycle racing engines to big block Chevy and Mopar V 8s. The closest motor Iv'e encountered with this size to hp ratio is a Honda Turbo or Wankel Rotary motorcycle engine of the last century. I write automotive review for one reason. We are living on the edge of the most dynamic tech-driven engine and motor evolution in history. It's damned exciting... Take a moment to watch the video. Listen to this motor run. The low friction properties of the motor become very evident in listening to the rev-line exhaust note. This motor is virtually friction free. Oh yeah, and that electric thing is also very cool...
Aaron Turpen wrote on January 31, 2014 - 3:57am Permalink
Thanks, Parks. Ya, this engine will change everything once it's perfected to the point it can leave the race track and be put into an everyday vehicle. It will change things in the same way that the EcoBoost/SKYACTIV high compression idea has changed views on how efficient combustion can be.
Auto Motvie wrote on January 31, 2014 - 3:21pm Permalink
I commented last year that we would eventually see 100hp per cylinder. Who would have ever imagined this technological breakthrough in gas engine wizardry. Installing this engine in a 3300 lb vehicle like the new C7 corvette would make it a mid three second supercar. AMAZING!
Aaron Turpen wrote on January 31, 2014 - 10:31pm Permalink
Funny, I was thinking the same thing, but with an Alfa 4C or a GT-R NISMO. :)