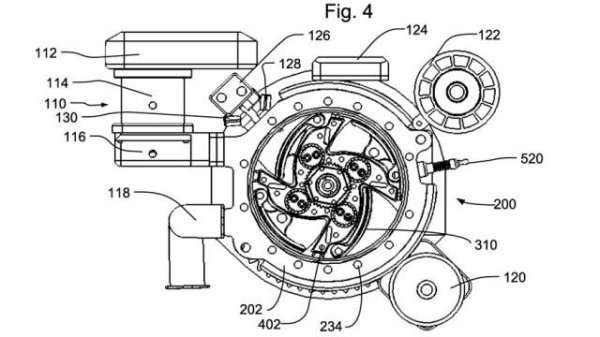 Wankel would be proud as a California startup has patented a new type of rotary engine which appears to address many of the problems of the original design Mazda made famous.
Advertisement

In a traditional rotary engine, which has been credited to a man named Wankel and perfected by Mazda, a pinched-oval block houses a triangular rotor with curved sides rotates like the wheel on a Flintstone's car. The openings around the rotor, which are alternately compressed and opened, burn fuel to keep the rotation going. California-based GoTek took that idea and replaced the triangle with a shuriken-shaped rotor that basically ups the three-chamber setup of the Wankel design to a four-chamber setup (shown above in their patent drawing).

The natural opening and closing of the chambers in the Wankel system is replaced by a gear-driven piston that pushes up and down like the flaps on an aircraft wing to shrink and expand the chamber for the strokes. Intake and exhaust ports are still opened and closed by the rotor's motion.

This has several advantages over Wankel's original design and nearly all of its benefits. The Wankel engine is far less efficient in both fuel usage and emissions than modern piston engine designs, which is the primary reason Mazda finally discontinued its use. The main problems were seals in the Wankel design since the corners of the triangular rotor could not completely seal the chambers as it spun, created a scenario where high oil consumption was the norm, resulting in poor emissions performance.

The GoTek engine design, however, has the inherent advantages of the Wankel, with its balanced movement, compact size, high torque output, and ability to be powered by any combustible fuel with little or no modification. On the other hand, this design is even more compact, thanks to the elimination of the need of the oval-shaped chamber, and can be sized up or down to fit any output requirement.

GoTek has a prototype they've shown some local news organizations in California which has an output equivalent to a 1.5-liter four-cylinder engine. That engine is only 6 inches wide and 12 inches around, however, and so is far smaller than an equivalent four-cylinder piston block. What's more, the GoTek design can be electronically timed so that several can be stacked together to run in unison. This would be especially helpful in some forms of electrical generation or power up-sizing in large vehicle applications where high power output is only needed in some circumstances and less output (fewer engines running) can be the norm otherwise.

GoTek is talking with automotive manufacturers about adopting the engine for various uses, which could include any type of motive machine, and will begin building them when contracts are signed. With just 13 moving parts, this is a far cry from the hundreds of parts that make up the average piston engine of today.

Kyung Hwan Kim wrote on August 17, 2017 - 9:03am Permalink
We have much interest in GoTek Energy Rotary Engines for various applications. For our review and negotiation with potential customers, please send us your distributor/retail peice information on your full products range with brochures and DVD. Upon receipt of your further information we will advise you of more specific our inquiries. Currently we have urgent purchase inquiry of rotary engines for 70 kw generator sets. ( Q'ty 30- 40 sets ), and please quote suitable model with deliveryn time.. Thank you. HaeKeon Corporation CPO Box 6472 Seoul South Korea Mobile : 82 10 3208 4999