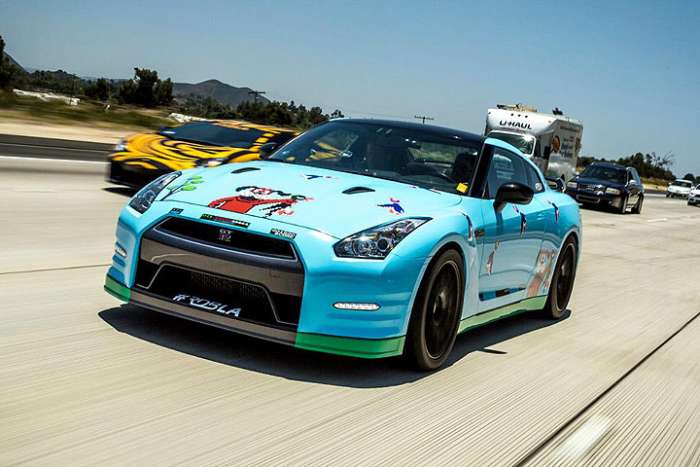 The Nissan GT-R wrapped in electric blue and featuring characters and scenery from the classic Nintendo game Duck Hunt is now for sale. Get your light gun and go buy this 884 horsepower one of a kind Godzilla.
Advertisement

The Nissan GT-R is one of the most sought-after supercars on the road. With a powerful V6 that turns all four wheels in screaming glory, the car is known to leave many supercars in the dust. Now imagine when one of these cars, dubbed Godzilla by fans, showed up at the 2015 goldRush Rally wrapped in blue and featuring characters and scenes from Nintendo's classic Duck Hunt game.

It was obviously an immediate crowd favorite. Here was one of the most powerful cars you can buy showing up not in sinister, intimidation-oriented livery, but instead in bright blue with pixelated graphic accents. When the nine-day rally was complete, the 2012 Nissan "Duck Hunt" GT-R may not have won the race, but it definitely won over the crowd.

Now that Duck Hunt Godzilla is up for sale. If you've got money to spend and want to bid, you'll find this unique GT-R on eBay for, as of this writing, $97,000 and counting. Hurry, though, the auction ends on October 21.

This 2012 Nissan GT-R is anything but stock, of course. Besides it's unique exterior, the owners of this car also sent it over to COBB Tuning SoCal for some work. The hand-built engine was disassembled and had its rods, pistons, and injectors replaced. Two new turbochargers and reworked heads were also put on. They then added an intercooler, a new fuel pump, and retuned the exhaust. The clutch and transmission were updated to handle the increased power.

That power now stands at 884 horses and 827 pound-feet of tire-burning torque. The wheels were replaced with 20-inch Rays Volk Racing alloys to handle the turn.