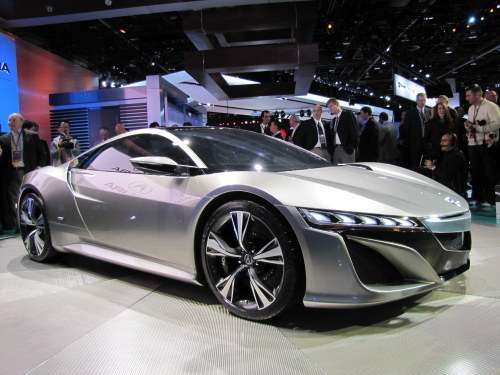 Going to Detroit this weekend? 5 concepts you must see

If you are headed to Detroit this weekend (or already there), then you are likely overwhelmed at the huge size of the show and how impossible it can seem to see everything. Don't fret, here is a short list of concepts that anyone attending the show must check out.
Advertisement

Acura NSX Concept
Likely the most striking concept to appear at the show, the Acura NSX was also one of the most anticipated. As a follow-on to the past models of the same name, people were very interested to see whether Acura would create something that would live up to the excitement of the old moniker. Most believe that they have.

Read Frank Sherosky's full writeup on the NXS by clicking here and be sure to check out the image gallery at this link as well.

Chevrolet Miray Concept
Another striking, very forward-looking concept, the Miray is Chevrolet's tribute to its centennial anniversary last year. It first appeared in Seoul, Korea (Miray means “future” in Korean) last year at the motor show and is now in Detroit.

This unusual 2-seater sport coupe has very strong lines that belie the smoothness of the front end and hint at the powerful musculature of the rear end. Read more about it in Frank's writeup here and be sure to check out the photo gallery and video included in that.

Lexus LF-LC Concept
Another highly anticipated showcase was the LF-LC concept from Lexus. This "futuristic hybrid 2+2 sports coupe concept" as Don Bain put it, wowed audiences when it debuted on Monday.

With striking lines, a fast shape, and innovative new hybrid power train, the LF-LC is definitely a car you'll want to see.

Lincoln MKZ Concept
While not as radical as the last three on our list, this new concept from Lincoln showcases where the Ford luxury brand is going with its future. It will actually begin appearing in showrooms later this year as a 2013 model.

The innovation in this car is centered on its new, more striking styling, its long look at the interior and spacial perceptions, as well as its new push-button gear selection and touch control systems for driver and passengers. You can read more about it by clicking here .

Toyota NS4 Concept
Finally, we look at a Toyota branded model, the NS4 plug-in hybrid. This car is not meant for production, but showcases everything Toyota plans to do in the next few years from drive train improvements to interior electronics and vehicle safety components.

The company has literally rethought everything from battery packs to window glass and included it all in this one conceptual model. Read more about it in this author's writeup here.

Bonus: MSU Formula Team Booth
As a last bonus while walking the floor in Detroit, be sure to stop by the Michigan State University Formula Team display. This college-level design and build team has been making formula racing cars for decades and this year has a great booth at the North American International Auto Show. They're exhibiting the 2009-10 and 2010-11 competition cars (car 71 and 51 respectively) as well as their latest work for the 2012 season.

The MSU team has been designing Formula SAE collegiate competition vehicles for the SAE International events and this year has 20 undergraduate students working on their latest concept. Majors for team members range from engineering to economics. This year's Car 27 model is being built right now and the booth showcases through visual presentations the entire process, from design to build.

So that rounds up what you can see at this year's NAIAS if you're in Detroit. Definitely worth the trip!