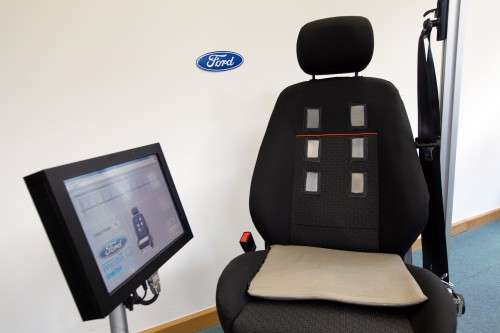 Getting on in years? Ford's got your back

Researchers at Ford are developing features and technologies for an aging society.
Advertisement

Ford engineers in Germany have developed a CAVE, an "age suit," and a driver's seat that acts like a nurse. What do these things have to do with automobiles? Simple: they're Ford's way of making cars more suitable for an aging society.

While most car companies work hard to wow the younger crowd, Ford is going for the older folks. Using research technology, new testing and development tools, and ideas for future medical monitoring integrated into the car, Ford is hoping to capture a larger share of the graying population.

In conjunction with the "third age suit," Ford engineers can see how the interior of a car's design affects those with more limited mobility.

The "third age suit" is a padded outfit of gloves, goggles, and a body suit that limits mobility in ways similar to how many people getting on in years are limited. Often, older drivers have a harder time reaching for some nobs or shifting a transmission unless things are set in a more ergonomic way for them. Using both CAVE and the suit, designers and engineers can better tune the interior layout to fit various customer demographics, including older folks.

Finally, the ECG driver's seat was introduced several months ago and has been progressively improving as engineers work with the technology. This seat can measure heart rate and irregularities through six ECG sensor pads built into the seat back. These work even through clothing, allowing the seat to monitor the driver's heart. Future plans may include blood pressure and other sensors as well and collaboration with Ford's proprietary SYNC system to allow communications with doctors and emergency responders.