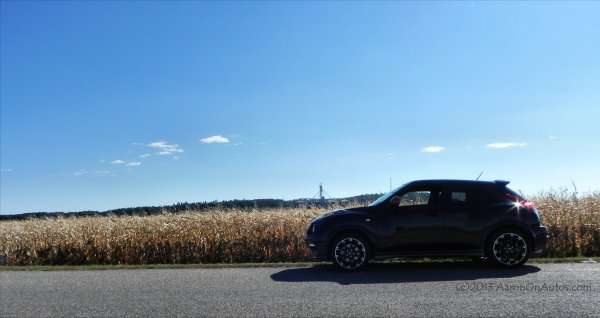 FWD vs AWD in the Nissan Juke

A common misconception among Juke owners is that the vehicle is slower in all-wheel drive mode than it is in front-wheel drive. With both comparison testing in the real-world plus some insight into the Juke's powertrain, we get to the bottom of this.
Advertisement

In forums and discussion groups, the Nissan Juke is often the subject of speculation. One of the more common questions is whether it's faster in AWD or FWD mode. Specifically in a zero to sixty. In a recent test drive with a 2013 Nissan Juke NISMO provided by Nissan as a press loan, we had a chance to put it through some paces for testing.

The NISMO package has 197 horsepower and a slightly better-tuned continuously variable transmission (CVT) as well as two all-wheel drive (AWD) options: AWD-v and AWD. AWD-v is vectored to split power 50:50 between front and rear while standard AWD mode sends power where the engine's computer senses it needs to be the most. For our testing, we ran three 0-60 trials each in front-wheel drive (FWD), AWD-v and AWD modes. All on the same country road, on the same day, and in the same Juke NISMO with the same driver. Timing was conducted by a friendly off-duty police officer with a radar gun on continuous and a GPS speed timer. We began at zero RPM for each of the tests then did a FWD and AWD run with RPM ramped to 3,000 for comparison.

The kicker with the Juke is to remember that CVT. It's what really dictates the little sport cross' time more than anything else. As our tests showed. Remember that the increased downforce from the NISMO package's aero-tuning doesn't come into play until higher speeds are achieved and the package has a weight similar to the standard Juke with all the trimmings. Our tests were also conducted at high altitude (over 5,000 feet), which affects times as well, due to lower oxygen content in the air. Sea-level testing would likely produce faster performance. For our tests, we averaged the three scores, but all are shown for reference. We rounded to the nearest tenth of a second.

The trick here is in the CVT. The continuously variable transmission does not seem to care whether the engine is ramped up or not, producing roughly the same start times either way. All-wheel drive, especially the vectored setting on pavement, produces better numbers simply because it improves traction control. There was no tire bark on the AWD starts like there was on the slowest FWD start. In fact, no "feathering" is required in all-wheel drive and the driver can simply mash the pedal to the floor at the go signal.

Offroad, in the dirt, things are similar. AWD is better than AWD-v simply because it dynamically applies traction, but the two are very close in feel. In all cases, faster times with AWD were had no matter what the surface. We conducted similar 0-30 mph dirt track tests and had similar results in timing spread, with the FWD falling further behind as the only measurable difference.

It should be noted that the Juke NISMO is not really a race car, per se, and while it's touted as a GT-style street racer, it's performance will be under-par compared to other race vehicles of a similar price point. What we found is that it really shines on the dirt track instead, where it can give many vehicles, including larger, more powerful crossovers, a real run for their money. While it may not necessarily beat many contenders in professional rally running, if properly equipped, it could become a contender in amateur events.

Regardless, the Juke is fun on so many levels that this comparison of 0-60 times is mostly just another way of proving that while the Juke may not be the end-all, be-all vehicle for everyone, it is a fun vehicle no matter how you slice it. Yes, there are haters. It's a polarizing design, after all, but the Juke enjoys a lot of lovers too. What do you do with yours?