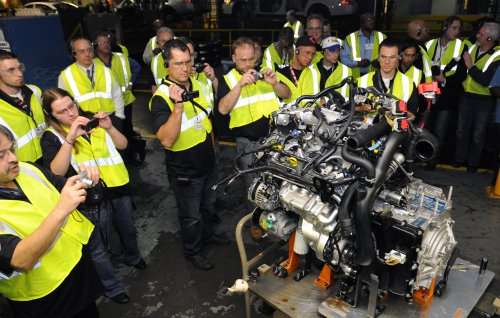 Ford is adding 4 more vehicle models to the lineup of 11 total that will offer an EcoBoost option for higher efficiency and better economy. This will expand availability of the more efficient option and triple production capacity of EcoBoost engines in Ford's lineup.
Advertisement

The EcoBoost engine family is capable of delivering up to 20% better fuel economy than conventional engines and will be available in more high-volume name plates in Ford's line up this year. Last year, 7 vehicle models included EcoBoost options while this year, 11 will offer it. This means a total of 9 Ford vehicles this year will have 40mpg highway or better this year.

The Ford Escape and Fusion will both have EcoBoost added as an option while the Taurus sedan will have two EcoBoost engine options, a 2.0-liter 4-cylinder and a 3.5-liter twin-turbocharged V6 will be optional on the SHO version of the sedan. In those cars, these engines deliver 31mpg and 25mpg highway, respectively.

The Ford Focus ST also includes an EcoBoost option this year as a sport compact and Ford is also offering an EcoBoost-powered Police Interceptor for fuel-efficiency minded police departments in 2012.

“EcoBoost expansion and availability in high-volume nameplates such as the all-new Ford Escape and Fusion will take this affordable, fuel-saving technology to the heart of the market,” said Ford Group Vice President of Sustainability, Environment and Safety Engineering Sue Cischke. “Ford is committed to delivering class-leading fuel economy for our customers, which benefits the environment and helps the U.S. move toward greater energy independence.”

Ford's top-selling vehicle, the F-150 pickup truck, was one of the first vehicles to include an EcoBoost option, with 56% of those sold in 2011 having a fuel-saving V6 option with EcoBoost rather than a V8.

According to the latest J.D. Power and Associates APPEAL study, Ford leads in fuel economy customer satisfaction in six of 11 market segments in which it competes.