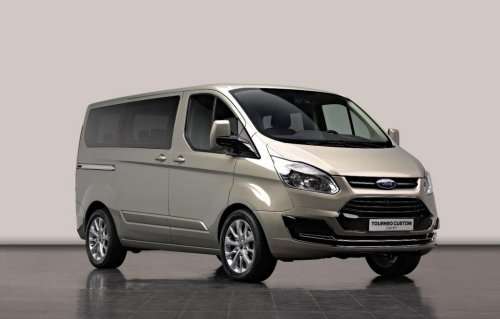 The upcoming 2012 Geneva Motor Show will have Ford showcasing this new concept as the company fights to regain market share in the European van market. The Tourneo is debuting as a consumer vehicle rather than a commercial one, aiming for what Ford calls the "personal use segment." Unlike its predecessors, the Tourneo is decidedly driver-oriented with a host of car-like features and, of course, Ford's new connectivity and ECOnetic technologies.

The cabin is fully-trimmed and much more luxurious than past European van releases in the Ford lineup. This includes multi-adjustable and removable rear seating options, advanced SYNC voice-activated connectivity and the aforementioned CO2-saving ECOnetic systems. The design is, frankly, plain and not very interesting, though you can see a much sportier stance to the new Ford than in vans of its past.

The exterior shape is, Ford says, a harbinger of future commercial vans in the small- and mid-sized segments for Europe. Ford's designers, of course, have nifty names for all of these changes, using terms like "Kinetic" and "futuristic." Someone should tell them that it's just a van and as vans go, it's ain't no Mystery Mobile.

The Tourneo is powered by a 2.2 liter Duratorq TDCi engine in the improved 155 PS version. This means good economy from Ford's latest-generation clean diesel technology. This is further advanced by the ECOnetic Technologies mentioned earlier, which has advanced low-CO2 features including Auto-Start-Stop and Smart Regenerative Charging.

Safety features include front and side impact airbags, an advanced restraint system, a rear-view camera integrated into the rear view mirror, and Lane Departure Warning and Driver Alert assistance features to alert the driver if the system detects the vehicle is inadvertently drifting out of the lane, or the driver is becoming tired behind the wheel.

The new Tourneo will be aimed at consumers, but is also meant to herald in Ford's new line of commercial offerings for the European market, which will be revealed through the year. Those will include some less powerful and more efficient engines depending on the van platform being offered. All are targeting best-in-class fuel economy. Various styles for cargo, refrigerated, and other specialty transport will be in the offing.

Ford hopes that these new additions to its stable will help it regain market share in the European van segments.