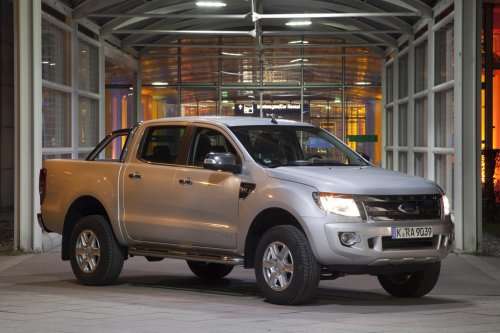 The new Ford Ranger has won the International Pick-Up Award 2013 in Dublin in a landslide win over the Isuzu D-Max and Volkswagen Amarok competition.
Advertisement

Although no longer in production or being sold in North America (see here), the Ford Ranger continues to receive popularity in overseas markets.

At press awards in Dublin, Ireland, in fact, the 2013 Ford Ranger won the International Pick-Up Award 2013 by a landslide, being called the "perfect blend of on and off-road performance" in a unanimous judging decision. It received more total points by vote from the panel of automotive press and experts than the second and third place winners combined.

This award follows on the Ford Transit winning the International Van of the Year 2013 award by the same panel.

"The Ford Ranger is a great all-rounder, combining the perfect blend of on-road comfort and stability with off-road capability," said Jarlath Sweeney, the Irish judge on the panel of CV journalists.

The awards were presented to Ford by jury chairman Pieter Wieman at the Fleet Transport EXPO 12 event in Ireland. The jury ranked the Ranger tops for its combination of cabin choices, on- and off-road prowess, strong engine lineup, payload and towing capability, and safety ratings. The jury awarded a total of 47 points to the Ranger.

The 2013 Ranger is offered with three cab options (Double, Super and Regular), either of two diesel TDCi engines, and both 2-wheel and 4-wheel drive. The 2013 model is completely new from the ground up, having been redesigned after production in North America - which formerly lead design efforts on the truck - ceased at the end of 2011. The Ranger is now more Euro-centric in its design and sells well in Europe, Africa, and Asia. It is the first vehicle in its class to meet stringent Euro NCAP 5 Star rating requirements.

The 1.0-liter EcoBoost engine that debuted in the 2013 Ford Transit Custom has also won International Engine of the Year.

Cees Wildervanck wrote on November 26, 2012 - 7:44am Permalink
This article suggests that the new T6 Ranger is the sucessor to the American Ranger, which it isn't. It is the successor to the Thailand Ranger, which was built together with the Mazda BT-50 pick-up. The new Ranger was designed in Australia and has hardly anything to do with the American Rangers. Neither had the old Thailand Ranger. I've ordered the new one and am very much looking forward to driving it.
Aaron Turpen wrote on November 27, 2012 - 11:45am Permalink
International design efforts on the Ranger were done in North America. Major differences between the U.S./European and Asia Pacific designs were mainly in safety and options. As the article states, this is the first time the Ranger has been designed overseas for exclusive overseas sales.

Tesla Contemplates A New Strategy for China Retail even As Sales Boom
Jay Leno on Elon Musk & EVs: “I Think He Should Get ... Credit"
END_OF_DOCUMENT_TOKEN_TO_BE_REPLACED