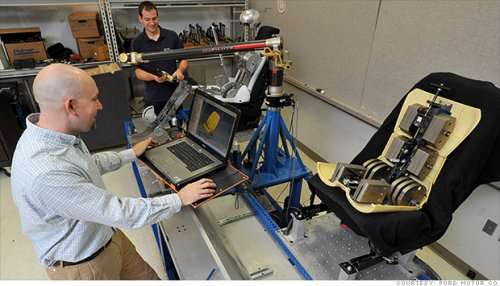 Ford to hire 2,200 salaried workers in the U.S. this year

Need a job? Call Ford. The company has announced that they will be hiring over two thousand salaried workers in the United States this year, building on the over eight thousand hired in 2012.
Advertisement

Ford hired more than 8,100 new employees in 2012 (1,000 of which were jobs re-imported from overseas) and is halfway to its goal of creating 12,000 hourly jobs in the U.S. by 2015 as the company aggressively builds product and investment to improve market share. This year, Ford will be adding another 2,200 salaried (read: professional, white collar) positions to its U.S. operations, the most added in more than a decade.

Ford has been increasing production capacity, expanding its engineering and manufacturing capabilities, and adding new technology to its vehicles at a fast pace. The company has been doing most of its technology research in the U.S. rather than overseas, something other auto manufacturers have also found prudent given the highly technical requirements many in-vehicle electronics and systems can have.

The 12,000 by 2015 goal is a part of a contract with the United Auto Workers union made in 2011 made in re-negotiations after Ford's recovery from 2008 recession drops.

“Our One Ford plan is designed to create profitable growth, and our new hiring is a direct result of our plan working,” said Joe Hinrichs, Ford president of The Americas. “As we expand our product lineup of fuel-efficient vehicles, we need more people in critical areas – such as in a range of engineering activities, vehicle production, computer software and other IT functions – to ensure we deliver the vehicles people want and value.”

Ford will be doing much of this new hiring through social media, hoping to find tech-savvy candidates by utilizing Facebook, Twitter, and LinkedIn. This will be done in conjunction with Ford's current push to find military veterans to fill unique roles within the company.

The announcement for this aggressive new white collar hiring from Ford comes on the heels of earlier announcements made indicating the company would spend more than $773 million this year on new equipment and capacity expansions in six facilities within Michigan, working towards a $6.2 billion total investment plan by 2015.

Joe Eckstein wrote on January 14, 2013 - 4:21am Permalink
If they are smart, they will have a building for professionals like myself here in Rochester, New York! We have the largest number of patents per capita in the WORLD! I have only influenced maybe 5 patents myself, but who's counting?