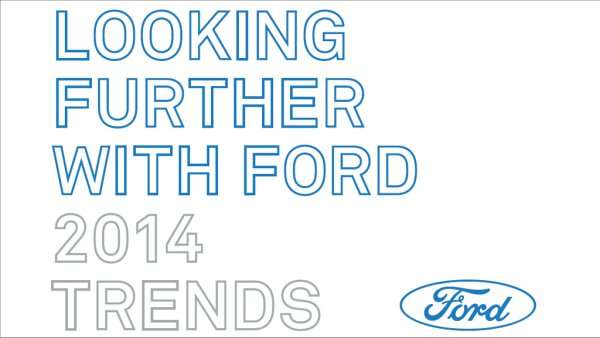 Ford doesn't want you to think green, think blue instead

Ford issued it's second annual trend report, titled Looking Further with Ford 2014, after a short conference with leading thinkers in consumer trends. The report shows how Ford has gone beyond thinking green and into the blue. Torque News was there; here's our take on it.
Advertisement

Ford held a trends conference today to announce the release of their latest trends report. The 2014 Looking Further with Ford Trend Report is a 52-page white paper from Sheryl Connelly, Global Trend and Futuring Manager at Ford Motor Company. It analyzes the coming trends that will affect the automotive market and technologies in 2014.

Most interestingly, the report has a focus on moving from the common "green" trends often cited by Ford and others in the past towards a "blue" trend which Ford sees as a more pressing issue globally. This is the second trend report Ford has issued and is the first to consider global issues rather than just regional, North American trends; reflecting the company's global focus.

At the conference today, Connelly was joined by guests Dan Creekmore, Group Director at Facebook, Debby Hopkins, Chief Information Officer at CitiGroup Ventures, and Chris Riley, Founder of StudioRiley. After an introduction to the report by Connelly, the panel discussed four topics they considered most "hot" in the ten-topic report focus.

Interestingly, their focus was not on the most telling topic in the report, that titled Sustainability Blues. While the trends in current innovation, social constructs, and micro-movements were interesting to hear - especially the topic of FOMO vs JOMO which can be easily related to automotive and which we'll delve into in a moment - the most telling subject in the booklet is the discussion of water.

"For years, we have been fixated on 'going green'," the report states, "protecting 30 percent of the earth's surface - but today, we're turning our attention to the other 70 percent, slowly recognizing that water is both a force of nature and the resource most critical to keeping our society afloat."

Those who've followed the "green" trends in automotive will immediately realize that of all the automakers out there, only a small handful - perhaps fewer than can be counted on one hand - mention "water" as a major topic in their environmental reporting. With 75 percent of adults around the world saying they are more aware of water usage now than they were five years ago and with most of the developed world now more aware of their drinking water sources (80% in the U.S., 94% in China, 80% in Japan) than ever before, sustainability practices are becoming more H2O-focused.

Ford's water commitment is outlined in the report with some simple graphical representations of what the company has been doing. The average vehicle, globally, uses about 4,000 liters of water.Ford has reduced its water use in its global facilities by 40 billion liters per year, with its new assembly and manufacturing plants becoming 100 percent recycling centers which re-use all of their water - the flagship being the newest assembly plant in Chennai, India. Overall, the company has reduced the water cost per vehicle produced by 8.5 percent with a goal of 30 percent reduction by 2015. From 2000 to 2012, Ford reduced its total water use by 62 percent, saving 10.6 billion gallons of water.

In the conference, Connelly touched on this subject with a reference to "this [water] being our most precious resource".

Beyond water, for the immediate future, though, the conference was about trends in innovation and technology that will likely impact driving. The most interesting of those, for reasons that will be obvious, is the FOMO vs JOMO debate.

FOMO is an acronym for Fear of Missing Out while JOMO is the juxtaposed Joy of Missing Out. These are two trends that often coincide with people in today's highly-connected digital world. As humans, we are naturally wary of being isolated from others while at the same time, we often taken joy in stepping away and seeking solace, away from others. This contradiction is even more pronounced in today's always-on world of communication where the instant gratification of posting status updates and sharing ideas can cause us to overload and then walk away in a "digital detox."

In the car, this becomes an issue as sometimes the driver may want that interconnected feeling, streaming Pandora and accepting text messages with text-to-voice or similar options. At other times, that same driver may want to shut all of that off and just be in an isolated cocoon. Car designers are already running into a FOMOvJOMO paradox as they design vehicle interiors and this will likely only keep getting worse as technology allowing our connected lives to intrude into the vehicle improve.

Consider, Connelly pointed out, that there are about 7 billion people in the world and about 5 billion mobile phones. Then think about the fact that the average cell phone user checks their phone 150 times daily despite 80 percent of Americans seeing the cell phone as a "crutch for people's fear of being idle."

Overall, the conference was interesting and the trends report even more so. This conference was a part of an overall day of events Ford is hosting as a precursor to their appearance at the upcoming North American International Auto Show (NAIAS).

LG's New EV Battery Plant Is a Welcome News for Tesla
Tesla Giga Berlin's New Hurdle: It's Not Only the Gov't, but Now Tesla Itself
END_OF_DOCUMENT_TOKEN_TO_BE_REPLACED