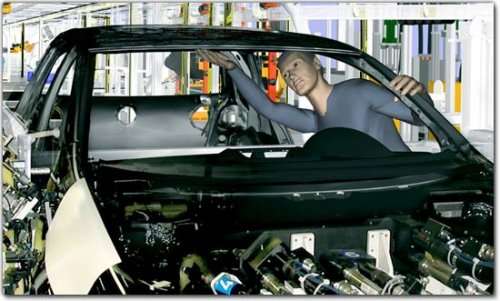 Ford is building a virtual factory

Video game technology is coming to auto manufacturing, but not for the reasons you might think.
Advertisement

Ford is building a computer simulation of an automobile manufacturing plant to virtually replicate a complete assembly line.

Using their extensive background as the world's first automaker to use computer simulation in their plant design process, Ford is continuing forward with this to the next logical step: perfecting manufacturing by simulating the process from start-to-finish through "virtual build events" using interactive 3-dimensional analysis.

The virtual factory is being built in Cologne, Germany and the project is headed by simulations engineer Jose Terrades from Ford of Spain. Once complete, the idea will be used for analyzing Ford manufacturing plants globally, including re-tooling plants in North America, Europe, and Asia to streamline processes and improve efficiency. Cologne is already the home of CAVE, Ford's Cave Automatic Virtual Environment for testing vehicle interiors.

The virtual plant uses state-of-the-art technology first introduced in popular video games along with the ingenuity of the engineers using the virtual process to perfect the assembly line.

The virtual factories the simulator will use are models of actual factories or can be manufacturing plants that are being planned for construction. Everything from the tools on hand to the autos being built are included – even virtual workers and how they interact with the assembly line. "Jack", the simulator's virtual employee, is evaluated on many levels by ergonomics experts who seek to reduce the stresses on his body as he works each point of the assembly line.

By reducing stresses, bottlenecks, and other slow-downs in the assembly process, Ford knows that it can speed up the building of vehicles and thus make them cheaper to make.

Ford conducts "virtual build events" within the simulator to start with a bare frame and build a car through to the end of the line, adding thousands of virtual parts. The cars are virtual versions of Ford's actual models and the assembly plant is one of Ford's actual plants, digitized into VR. With time, Ford believes that this will reduce the testing process of plant tooling, lessen the number of physical models of prototype vehicles needed, and further refine the process of designing and building a car to make it less expensive.

Once the simulator is complete, Ford will begin virtualizing all of their facilities worldwide.