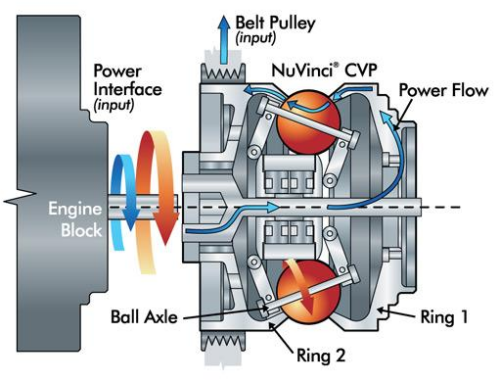 The supercharger will be based on Fallbrook's continuously variable planetary (CVP) technology called NuVinci and could help automakers downsize engines and increase fuel efficiency in a big way.
Advertisement

Fallbrook is targeting automotive original equipment manufacturers (OEMs) for this variable speed supercharger (VSS) and is currently working with a Tier 1 automotive equipment supplier on development of the device. Test results show potential fuel-saving and engine down-sizing opportunities that do not adversely affect performance and drivability.

Based on the company's NuVinci CVP, the VSS uses a set of rotating and tilting balls positioned between the input and output components of the supercharger (see schematic). The balls tilt and move to change their contact diameters, varying the ratio of injection in much the same way CVP operates in an equipped transmission to change speeds in gearing.

Using this, a smaller engine can still output higher torque and horsepower values, even at lower RPM ranges. Most superchargers and turbo units require high RPM to operate efficiently, but Fallbrook's VSS allows operation in a much broader range of RPM, increasing efficiencies. The NuVinci-enabled supercharger can be independently controlled from engine speed, allowing intake and ingestion to be separate. This means that airflow to the engine's ingestion can be precise with little to no bypass losses and their associated performance and efficiency issues (NVH).

The unnamed Tier 1 supplier which Fallbrook is working with has put the prototype VSS to the test and found it to meet automotive class durability requirements. The VSS is designed to be dropped into any engine as its case can be modified to fit any OEM fitting needs. Fallbrook says that independent testing has also shown that their supercharger allows smaller, more efficient engines to operate at outputs equivalent to larger counterparts without sacrificing efficiency at lower RPM thanks to the ability to tailor supercharger boost to driver demand.

Fallbrook and the Tier 1 manufacturer/supplier are in talks with potential OEM customers for the VSS. They've packaged the current prototype to match a currently-available supercharger for easy mating. The demonstration vehicle for the VSS testing and performance gauging is a 2008 Mustang Bullitt using a ProCharger supercharger and a NuVinci DeltaSeries CVS drive. This hints that the ProCharger is the model and that Ford may be the initial OEM they're targeting. This would make sense as Ford is evaluating plans for 3-cylinder engine adoption and this VSS may be a great fit for that.

Fallbrook has also simulated swapping a 3.6L V6 out of an unnamed SUV and replacing it with a 2.0L I4 engine with VSS installed at the factory with higher initial torque and maintenance of the V6 torque plateau being the result, peak torque beginning at only 1800 RPM and holding to 5000 while the V6 peaks at 3000 to 5000 RPM. The VSS potentially doubles the torque of the I4 (when normally aspirated).

The entire line of Fallbrook DeltaSeries of accessory drive solutions are geared towards decoupling accessory RPM from the engine's RPM, allowing components without fixed ratios to be used. This lowers engine drag by accessories and increases performance and efficiencies as a result. Fallbrook is using this idea to develop cooling fans, alternators, AC compressors, etc. This includes engine crank mounts which could be used to control the speed of the whole accessory belt line.

Toyota's First EV Will Have a Name of BZ: Toyota BZ
First Videos From Inside The Boring Company's Las Vegas Loop
END_OF_DOCUMENT_TOKEN_TO_BE_REPLACED