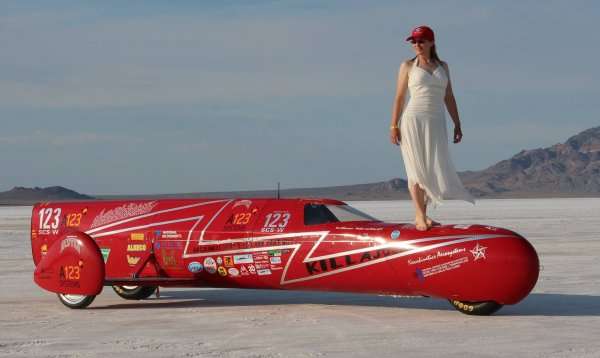 Computer modeling estimated that the top speed for the KillaJoule electric streamliner motorcycle was about 270 miles per hour. Now, the fastest woman on a motorcycle has proven that with a new world record.
Advertisement

The Mike Cook's Shootout event had a huge array of wheeled machines ready to take to the salt and vie for records and fame. Yet the stars of the show were the KillaJoule team of five dedicated electric speed enthusiasts. Bill Dube, creator and owner of the KillaCycle electric dragster; Eva Hakansson, engineer and KillaJoule driver; and a three-person pit crew consisting of Mike Stockert, Alicia Kelly and Kent Singleton were the entire team. Most other teams on the salt consist of up to a dozen players working together.

Making its runs and then returning for a recharge from a biodiesel generator as the chutes got repacked and the ice water cooling system was flushed and refilled, the KillaJoule needs little attention outside of these maintenance items between runs. Yet this motorcycle, one of the simplest machines on the raceway, beats all but the smallest handful in speed.

The Shootout had the KillaJoule smashing its own 240 mph record with a phenomenal 270.224 mph average. The team believes that this speed is as fast as the motorcycle can go in its current configuration. The team plans to call this a race year and return to the garage for more tinkering to see if they can't improve aerodynamics, push a little more juice out of the batteries, and otherwise work towards a 300 mph goal for 2015.

"Going to work on some improvements over the winter, and perhaps make an attempt for 300 mph next year (300 is such a nice, round number… )" says Eva in a blog post.