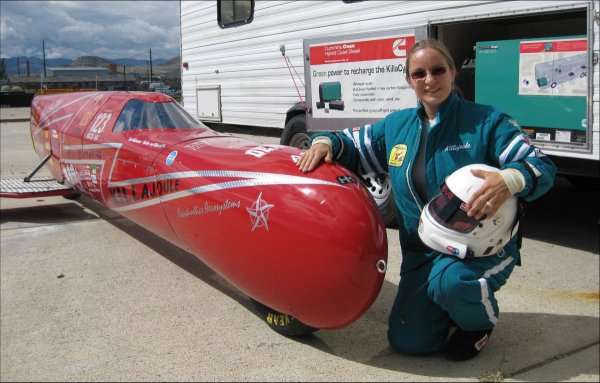 The KillaJoule electric motorcycle, driven by Eva Hakansson of KillaCycle, has hit three world records on the Salt Flats.
Advertisement

The KillaCycle Racing team are no strangers to setting world records. The KillaCycle electric drag racing motorcycle has held multiple records for speed. Now the team's latest project, five years in the making, is a streamliner motorcycle called the KillaJoule. This weekend, the KillaJoule and designer/builder/driver Eva Hakansson took records after completing a 241.901 mile per hour run on the salt flats.

All records are pending certification, of course, but recorded speed totals from the event at Bonneville have the KillaJoule smashing through the world record with about 25 mph to spare at 241.901 mph on its top speed and an equally-respectable 240.726 mph for its two-way average.

I first met Eva Hakansson and her husband Bill Dube at their Denver-area headquarters in Colorado about five years ago. At that time, the KillaJoule was barely an idea made up of nothing more than a few CAD drawings and a rudimentary frame. Hakansson, a Swedish immigrant who'd joined the KillaCycle team as an engineer and who was completing her master's in engineering, had conceived of the idea and the build for the KillaJoule was literally taking place around her. She was always the intended driver and so the cockpit dimensions were formed around her small frame.

Hakansson has since completed her degree and is now a PhD student in mechanical engineering at the NSF Center for High Voltage/Temperature Materials and Structures at University of Denver. Her husband, Bill Dube, is a mechanical engineer and research scientist with NOAA and the founder of KillaCycle Racing and the famous KillaCycle dragster. Between these two engineers, the KillaJoule was born.

Built on a tubular steel frame around Eva and the 500 horsepower EVO Electric motor and lithium nano-phosphate batteries from A123 Systems, the KillaJoule is clad in fiberglass and aluminum. Eva's father, Sven, designed the Springer-style suspension. European motorcycle enthusiasts will likely already know the Sven Hakansson name.

Out on the Bonneville Salt Flats, the KillaJoule had its best series ever. Although it already held records for speed in its class, Eva and Bill knew that the electric motorcycle had a lot more to give. With fine-tuning, a handful of improvements, and a first-run under their belts, the team knew it could make it this year. And they did.

Yet, Eva says that the KillaJoule was still being "held back." It's hard to imagine "holding back" at 241 mph, but we'll entertain the idea and listen to her point. On the KillaCycle Facebook Page, she remarks "..there is about another 20 % power or so. The short track, the wet surface and some issues with the suspension setup didn't allow me to use all of it. I am quite sure that it will do at least 250 mph under right conditions."

She may prove her point in a couple of weeks when the KillaJoule team returns to Bonneville for another event. Meanwhile, here's what it's like driving the KillaJoule at that kind of speed:

John H. Hopkins wrote on September 18, 2014 - 11:03pm Permalink
Congrats! Would like to read the book on this project. Specs would be nice. Vehicle frame/fabrication, internals, etc. Were the tires especially fabricated? Any future projects on the books? Scientists/engineers still getting it done! Nice! Stay safe!