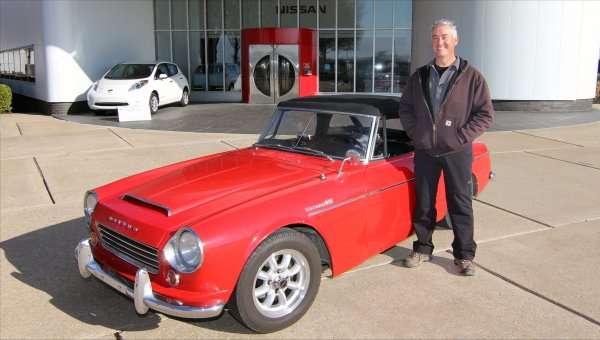 Enthusiast documents his ultimate road trip in a 1967 Datsun Fairlady

For many of us, when we need to unwind we take a drive. Sometimes, that drive becomes epic. For Scott Fisher, it was a 30,000 mile journey across America in his 1967 Datsun Fairlady Roadster.
Advertisement

Scott Fisher was a business owner in Las Vegas who, after sixteen years, decided he needed to unwind. So he climbed into his 1967 Datsun Fairlady Roadster, started a blog, and began driving.

"I had owned a manufacturing business in Las Vegas for 16 years. I knew I needed to kinda' get out, and unwind, and get my mojo back," said Fisher.

So far, he's covered more than 30,000 miles on that little road trip, leaving his Las Vegas home last spring and going to the West Coast to drive up the historic highways and side roads that follow the ocean's shores.

"I got up into the Northwest when it was hot in the South, and I got over into the Northeast for fall, which has allowed me to keep the top down, maybe 80 percent of the time. I drove through the polar vortex cold snap. Car even ran well through that. Started right up, idled, didn't seemed phased by it at all," said Fisher.

Nissan, for their part, was unaware of Fisher's trip until someone there noticed his blog. When they realized he'd be getting close to their Tennessee HQ, they invited him to stop in for a visit. So he did. They took him on a tour of Nashville's Lane Motor Museum and then the Nissan Assembly facilities in Smyrna.

In his travels so far, which are ongoing, Fisher has seen forty-four states, seven Canadian provinces, and countless landmarks and small towns along the way. He's chronicled the trip with photos, short video, and commentary on his blog at RoadsterRoadTrip.com.