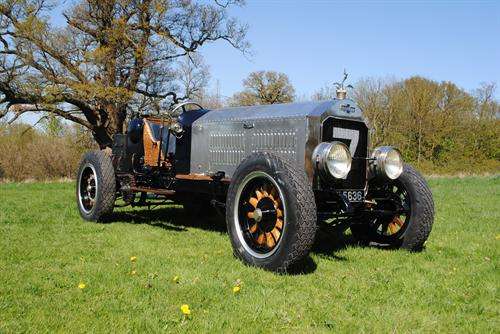 Does this 95 year old LaFrance Open Speedster still have what it takes?

The 1918 LaFrance Open Speedster sports a massive 14.5 liters of displacement and was a powerful, speed demon of a departure from the fire trucks this company usually made. Behold one of the most eco-unconscious and awesome vehicles to have ever been crafted.. and it could be yours!
Advertisement

On Saturday, June 1, the Historics at Brooklands auction in Surrey, England will take place. At that event will be several classic and historic cars, not the least of which will be this beautiful Speedster.

American LaFrance was and is a fire truck builder. Once in a while, especially back in the heyday of early motoring, they forayed into car building. Like most manufacturers of the time, they usually did this in order to race and make a name for themselves. The New York-based company has built several passenger cars since opening its doors in 1830, but few are as drool-inducing as this Open Speedster made in 1918.

Number SV 5636 was built by LaFrance in New York and then shipped to the United Kingdom to a lucky buyer. Eventually, it became a touring vehicle attending rallies and such before receiving a restorative overhaul a few years ago.

Back in 1918, this was a highly impressive machine and 95 years later, that hasn't changed. The blue leather bench sits high in the old Speedster, giving a commanding view of the countryside. Wear your goggles, though, because this fourteen and a half liter beast doesn't come with a windscreen.

Now imagine this: that big, growling 2.4-liter per cylinder behemoth under the Open Speedster's long hood is there to propel the 3.5 ton machine forward to speeds up to 150 kph (93 mph). All while riding on those huge wooden wagon wheels clad in thin rubber and propelled by a chain.

Yes, the LaFrance Open Speedster is a chain-driven, wooden wheeled monster based on the fire truck chassis the company engineered at the time. Given the mammoth proportions and powerful output of this car, it's no wonder they were so popular and remain so today. Many are still on the roads, often participating in races globally. The Peking to Paris Rally has had one appear in every event to date save one and the West to East Road Race here in the U.S. features one every time as well.