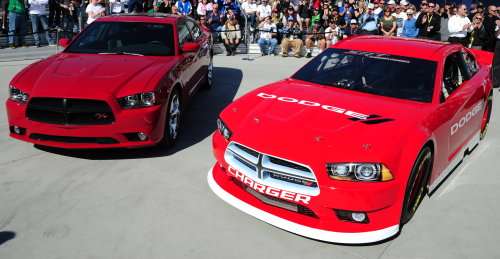 The 2013 Dodge Charger Sprint Cup gets unveiled in Vegas, smashing all previous designs

Race fans in Las Vegas, Nevada were treated to the unveil of the latest in the new look for NASCAR, this one from Chrysler-Dodge with their new 2013 Charger Sprint Cup, whose looks are likely the best yet unveiled for the new-generation makeover in racing.
Advertisement

A far cry from the 1969 General Lee that made the model famous thanks to the hit television show The Dukes of Hazzard in the 1980s, the new Charger is decidedly less streamlined with more muscular bulk than its famous predecessor. True to those lines, Dodge unveiled the latest NASCAR Sprint Cup version of the Charger, which holds that beefiness and retains the low brow and mean grille of the 2013 Charger production car's design.

Although most of the car's details are actually in decals rather than physical impressions on the bodywork, the new NASCAR look is to include more depth and contour, loosening the strict design rules to allow manufacturers to build racers that are more true to their production model's designs.

At the nose of the 2013 Charger Sprint Cup, for example, the grille is a depression in the bodywork (replacing the usual decals on many NASCAR models of previous years) with the signature Dodge cross dividing it into quadrants. Headlamp and fog lamp decals adorn the corners above and below the bumper bubble while the lower scoop includes another vent opening.

Small impressions along the doors above and below mark the lines of the production Charger as well. The rear slope of the coupe to its NASCAR fin also mimic the production car.

Of the NASCAR designs in the new allowances released so far, this 2013 Dodge Charger Sprint Cup may be the best-looking yet. Frankly, the tease of this new unveiling from Dodge didn't do it justice at all.

Fans crowded the venue as SRT Motorsports pulled the curtain on this new Sprint Cup from Dodge. The car will compete in the 2013 race season. The new Charger design is a definite standout on the race track, looking very different and more recognizable as a Dodge Charger than any other release to-date. SRT credits Chrysler-Dodge, NASCAR's rule changes, and the team at Penske Racing for the final design of the 2013 Sprint Cup Charger.

Ralph Gilles, president and CEO of SRT Brand and Motorsports, unveiled the new Charger at a special press and fan event in Vegas. The new Sprint Cup was shown next to the 2013 Dodge Charger production model it represents on the track. As he put it, the car was two years in modeling and production and SRT "put their windtunnel on overtime" for the design.

See video of the unveil on the NASCAR website by clicking here.