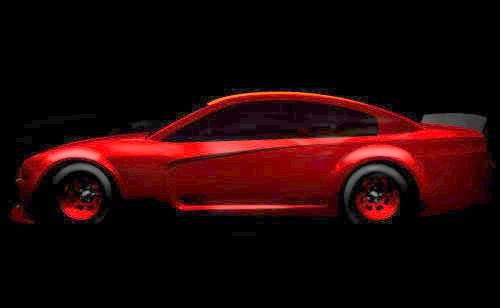 The Dodge NASCAR effort took a big hit yesterday when Ford Motor Company announced a new contract with Penske Racing, but with the introduction of the shadowy teaser picture on the right – its evident that Dodge Motorsports isn’t giving up on the NASCAR Sprint Cup program as they will unveil the new 2013 Dodge Charger Sprint Cup car on March 11th.
Advertisement

The 2013 Dodge Charger Sprint Cup car features the distinctive body lines of the Charger production model as NASCAR has made new rules that allow automakers to make their race cars look a little more like the road going versions. Based on the teaser picture, the Charger Sprint Cup car will have the bold body lines along the side of the new production street version of the muscular sedan. The new NASCAR restrictions have allowed the Dodge Motorsports engineers to make a large window opening on the sides to match the long greenhouse of road car as well. The result of these designs looks to be a great looking stock car that looks a great deal more like the road version than does current Charger stock car.

Sam Hornish Jr., who currently drives a Dodge Challenger in the NASCAR Nationwide Series for Penske Racing, was able to drive the new 2013 Dodge Charger during a closed testing session earlier this year at Homestead-Miami Speedway. Based on the look alone, Hornish had good things to say about the new design: “The car looks the best out of any of the new cars, that’s for sure - nice, sharp lines - and you can see a lot of the street car in the race car. It brings the Charger’s identity back onto the racetrack.”

Chrysler hopes for this new 2013 Dodge Charger Sprint Cup car to help promote the idea of “race on Sunday, but on Monday”. That was one of the mottos of NASCAR back in the day when the driver’s were actually piloting modified stock street cars but the advancements in technology have made NASCAR race cars absolutely nothing like the road going versions.

The Dodge Charger Sprint Cup car is the only vehicle in the series that is based on a rear wheel drive production vehicle (albeit a sedan), with the Chevrolet Impala being the only other vehicle with a V8 option although it is a front wheel drive sedan. The Ford Fusion and Toyota Camry stock cars are both based on front wheel drive sedans with no V8 option. Ford had been considering using a Ford Mustang body for the 2013 NASCAR Sprint Cup, similar to the one that they use in the NASCAR Nationwide Series but Ford backed out, instead basing the 2013 Sprint Cup car on the sleek new Ford Fusion sedan. Ford has gone back to the “race on Sunday, buy on Monday” idea with the rear wheel drive, V8 powered Mustang for the Nationwide Series with considerable successes but for the NASCAR big leagues – the Fusion sedan will stay.

The 2013 Dodge Charger Sprint Cup car will likely be joined by the Dodge Challenger Nationwide Series car but the bigger concern is who will be competing in the sharp new Dodge stock cars? Penske Racing was the only multicar team running a Dodge for the 2012 season and with their announcement that they will be moving to Ford for 2013 – Dodge is currently without a major team in the Sprint Cup Series. Hopefully, for the sake of Dodge racing fans, there is a team lined up to compete in the sharp looking 2013 Charger Sprint Cup Car.

The new 2013 Dodge Charger Sprint Cup Car will make its public debut at 10:30am on March 11th, just before the start of the Kobalt Tools 400 at the Las Vegas Motor Speedway.