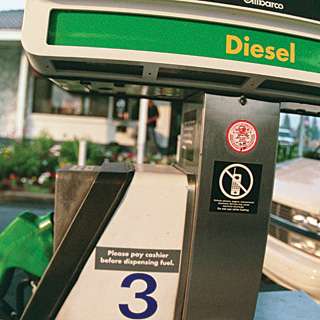 Diesel will be around for a long time

Diesel is a controversial fuel amongst environmental advocates, but from passenger cars to heavy-duty haulers, diesel will remain a dominant fuel of choice for decades.
Advertisement

Americans think of diesel fuel as the dirtiest, nastiest stuff available. It's associated with loud engines, black smoke, and slow big rigs on the highway. Environmental advocates often malign diesel as a dirty, polluting menace. Biodiesel is often lumped in with ethanol as a food-thieving green fuel.

For all of its bad publicity, however, diesel is the most common fuel in the world, dominating as the developing world's liquid fuel of choice and powering nearly half the automobiles in Europe and large percentage of those in Asia. In the United States, the bulk of our heavy machinery and freight hauling vehicles are diesel-powered. Tractor-trailers, trains, buses, earth movers, military machines, and many more are using diesel as their fuel source.

Despite calls to replace diesel and other petroleum fuels with alternatives, our world is powered by diesel fuel and will be for some time to come.

Two years ago, the U.S. Department of Energy commissioned the National Petroleum Council to report on what fuels will power America's foreseeable future. That report, delivered in August of this year, titled Advancing Technology for America's Transportation Future, finished a two-year study into fuels, technologies, industry practices, and government policies through to 2030 that are and could continue to reduce greenhouse gas emissions from American transportation by fifty percent by 2050.

The crux of its findings?

“Diesel engines will remain the powertrain of choice for HD vehicles for decades to come because of their power and efficiency. There are, however, opportunities to improve the technology. Significant fuel economy improvements in diesel powered trucks are possible. Indeed, the fuel economy (mpg) for new Class 7&8 HD vehicles, which consume more than 70 percent of the fuel in the trucking fleet, could be doubled.”

The report also found that market dynamics, not government, will contribute the most to how technology and future fuels are adopted and used.

“There is a great deal of uncertainty regarding which individual fuel-vehicle systems will overcome technology hurdles to become economically and environmentally attractive by 2050. Therefore, government policies should be technology neutral while market dynamics drive commercialization.”

Currently, and in the near future, there are no viable replacements for diesel in most heavy-duty markets and few that will suffice for medium-duty needs. Heavy transportation will be needed for a very long time and over-the-road (OTR) as well as rail-based cartage are the means of choice for most freight. Other options are either experimental or merely blueprints and will not replace these primary means of freight transportation for decades. So most of the changes we'll likely see in goods transportation will happen inside existing transport matrices rather than through the introduction of new ways of moving material.

This means diesel will continue to dominate. In the medium-duty market, some alternatives for vehicles are available and will continue to carve niches in the market. In heavy hauling, however, no feasible alternatives to diesel are being offered currently and known technologies are either not going to be viable for the market at all or are decades away from being implemented.

Particulate emissions, which are of concern in diesel engines, are dropping despite the growing number of diesel engines in use in the United States and Europe. In these developed countries, regulations and new technologies are lowering the amount of PM emitted by diesel engines and after-treatment options, once only popular in passenger cars, are now being used in many on- and off-road machines. In particular, the passenger fleet (buses, shuttles, etc) are often the highest source of urbanized PM emissions and are the focus of many of these upgrades.

Passenger vehicles may move away from gasoline, but the attraction of diesel will likely keep it viable for many years. With its very high efficiency (compared to gasoline), its robust longevity, and the relative ease of refinement for diesel (including biologic sources) mean it is a fuel that both burgeoning and established vehicle markets can and do embrace. The emissions from diesel is generally cheaper and easier to control than are those from gasoline as well.

So expect to see diesel as a primary fuel option for at least the next twenty to thirty years. Like it or not.

Marvin McConoughey wrote on November 5, 2012 - 9:40am Permalink
I agree with everything except the reference to diesel's "robust longevity." If this means engine longevity, then diesels have no inherent advantage. Diesels last longer, when they do, because more money went into making them robust. This is done because diesels are often the engine of choice for commercial trucks where owners expect very long life. Lower cost diesels can be either well made or fragile. Witness GM's auto diesels in 1979 and the early 1980's. Anyone who wishes to learn more can access numerous technical papers that address such things as heavy duty pistons, extreme service engine bearings, etc., all of which could be equally applied to either gasoline or diesel engines.
Aaron Turpen wrote on November 5, 2012 - 4:06pm Permalink
GM's 1980s diesel engines in the automotive market failed because they were badly designed. End of story. Diesel engines are inherently more robust because of the nature of the diesel combustion process itself, which is done under high pressure. Unlike high pressure gasoline engines, complicated injection and spark ignition requirements are not present. The heaviness of the components and block are a disadvantage in vehicle weight to horsepower ratios, but an advantage in life expectancy. To claim that a gasoline engine could be as robust as a diesel engine ignores the fundamentals of how the two combustion engines operate.
Marvin McConoughey wrote on November 5, 2012 - 7:03pm Permalink
I understand the fundamentals very well. You are right in referring to the high peak diesel combustion pressures that necessitates strong engine blocks for. However, the strong block does not by itself ensure exceptionally long engine life. It only creates the potential. To create the million-mile Class 8 truck diesels requires that large amounts of money be put into engineering for long life. That same money applied to a gasoline engine block would create as long, or longer, life, though not equal fuel efficiency. For example, the latest Class 8 engines often use cast steel pistons, individually cast cylinder liners whose metallurgy can be precisely controlled, sodium filled exhaust valves, sputtered engine bearings by Federal Mogul or others, induction hardened crankshaft journals, gear drive to the camshaft, etc. These are all available engineering options that can be applied to either diesel or gasoline engines. An example of inadequately engineered truck diesel engines would be the later series of V8 diesel engines that International supplied to Ford. International currently is forced to buy engines from Cummins because its own engineering efforts failed to develop a new engine line that would meet emission standards without elaborate exhaust treatment.. Diesel and gasoline fuel injection systems differ in detail and materials, but diesel engines also feature complicated direct fuel injection systems that spray directly into the combustion chamber. These systems are complex and often feature multiple injections. Once mechanical in nature, diesel fuel injection systems now require elaborate computerized electronic controls and exhaust treatment systems to comply with federally mandated emissions standards. Can a gasoline engine be designed to last as long as a diesel engine? Absolutely. In fact, the gasoline engine enjoys the advantage of more gradual combustion pressure rates of increase, and uses cleaner fuel that inherently creates less of the carbon soot that has necessitated so much research and development in the diesel engine field. The Society of Automotive Engineers, along with its Chinese, Japanese, Korean, and German counterparts has thousands of technical papers dealing with both engine designs. The lesser engine life of automobile gasoline engines reflects the economics of the marketplace, not inherent engineering limits.