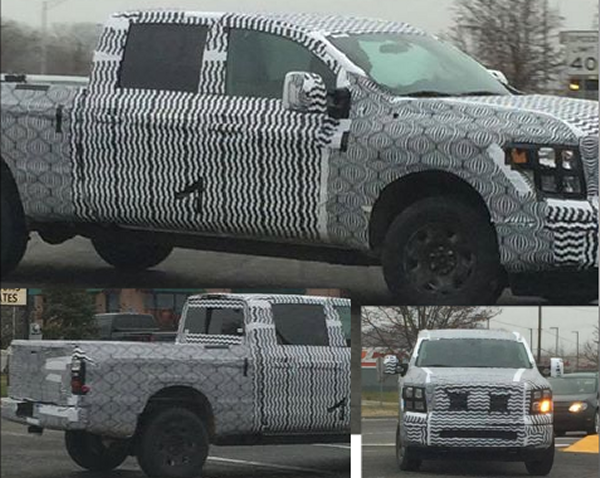 Did Someone on Facebook Just Capture the 2016 Nissan Titan Diesel Testing?

Photos on a popular diesel forum on Facebook may be of the 2016 Nissan Titan with the Cummins Diesel driving the streets of Indiana.
Advertisement

We ran across some spy shots proporting to be the new 2016 Nissan Titan Diesel with the Cummins 550 lb-ft engine under the hood. The shots were said to be from Indiana and picture a full-sized pickup truck decked out in striped camouflage driving through a town in the late fall.

The photos were posted to Facebook by Clean Diesel Performance, a group that talks about diesel cars, trucks and engine makers. You can find the photos on Facebook. I commented on that post and will elaborate below.

To begin, the truck shown appears larger than the current-generation Titan, which will likely be the case. The front grille is masked heavily, so it's difficult to get any detail, but the headlights are unlike the current-generation Titan and are much more akin to what's seen on the new Chevrolet and Ford trucks. The trailering mirrors seen are also very different from the current Nissan design, having a more rounded post. We do know that this is a diesel truck, however, given the diameter of the exhaust.

On the other hand, the rear glass, high belt line, and specific masking of the grille could indicate that this is a Nissan truck. Its ride height and gaps in the wheel wells, though, might not be conducive to a half-ton pickup, as the 2016 Titan Diesel will be, and could be more in the three-quarter ton range, though that's difficult to assess. With a heavier engine and the bigger towing capacity it brings, Nissan could have chosen to beef up the rear end - indeed, they'd have to.

All in all, it's very hard to say whether or not this is the new 2016 Nissan Titan Diesel, so the camouflage maskers did their job well. I'm inclined to believe it's a Ford rather than a Nissan, given the location and front-end styling of the truck. I also know, first hand from Ford, that the Super Duty F-series, including diesel and will be showcasing that soon (probably in Detroit). I'm told it's going to look a lot like the Atlas concept showcased last year, which would also match what we're seeing in these photos from Indiana.

What are your thoughts?

Robert C wrote on December 12, 2014 - 6:03pm Permalink
OK Looks good. Let's get her into production. Put the baby diesel into the Frontier too.
cory wrote on December 12, 2014 - 10:20pm Permalink
that truck has Titan written all over it, makes sense since they are announcing it next month....it's going to be a good year for trucks.
Aaron Turpen wrote on December 12, 2014 - 11:18pm Permalink
Robert, I sincerely hope you're right. I suspect they'll show off the Frontier with a diesel after they unveil the Titan, maybe at the New York or Chicago show. Cory, I'm still not convinced that this is the new Titan in these photos, but neither of us has evidence for sure either way. Until I see it unveiled in Detroit (where I will be front and center, hoorah), I guess it's just a guessing game. I've been salivating about this truck for a year now.
Lee wrote on December 15, 2014 - 12:50am Permalink
im 99.9% sure this is Nissan. Look at the cab shape. Note bottom left where cab and bed meet. Identical to current design and if I am not mistaken they were not doing a ground up redesign. I own a 2013 pro 4x and am going to step up to either a ford raptor (2016 model) or if Nissan steps it up a 2016 pro 4x Cummings 5.0. I hope Nissan comes through but right now from the options in a factory high end 4X (z71,TRD PRO, pro 4x, and raptor) ford has owned it.
Aaron Turpen wrote on December 15, 2014 - 11:16am Permalink
You may be right, but you're wrong on the redesign. Nissan has said that they will be redesigning the Titan ground-up. They're going to offer more options and (likely) a more base model for commercial/professional use.

Tesla Contemplates A New Strategy for China Retail even As Sales Boom
Jay Leno on Elon Musk & EVs: “I Think He Should Get ... Credit"
END_OF_DOCUMENT_TOKEN_TO_BE_REPLACED