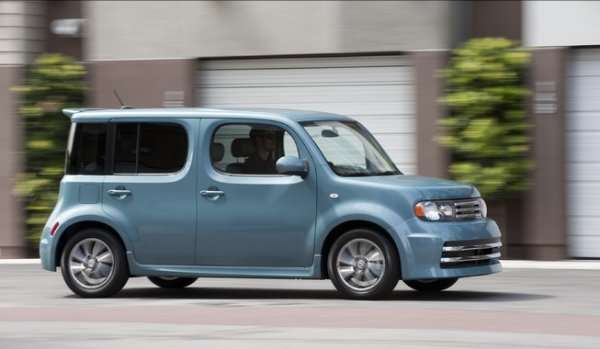 Is the Cube driving off into the bright white light?

The Cube was not included on the lineup of 2015 model year changes Nissan released, making us wonder if it is being pulled from the market like a dramatized Canadian film festival showing.
Advertisement

The Nissan Cube, much like the characters in the film of the same name, has been wandering aimlessly in the U.S. market since its introduction. It's unusual design, odd model placement somewhere in the narrow gap between the Juke and the Versa, and its off-and-on marketing have meant that the Cube has held consistently low sales numbers for most of its lifespan in North America.

When it released a list of updates for its entire model line, Nissan left off the Cube, making us believe that its current 2014 rendition is the last of the line.

The Cube, of course, isn't the only vehicle with polarizing style in the Nissan lineup. It is, however, exceedingly unique in its look, unlike the Juke which, while polarizing, still has a general theme that follows the other crossovers in Nissan's parking garage.

The Cube was introduced in 2009 to compete against the small semi-crossovers of the period, most of which had odd styling themselves. These included the now-dumped PT Cruiser from Chrysler, the defunct Chevrolet HHR, and the only clear winner of the group, the nicely-selling Scion xB. The Cube's main selling point was "cool" and, well, if sales are any indication, the Cube must have thick glasses and a pocket protector..

We reached out to Nissan to find out the official word on the Cube and got a generic non-answer that, in itself, was verification of our assumption. "The 2014 model remains available for sale," we were told, and the future of the Cube will be announced soon. A few hours later, the official announcement of the Cube's demise was given.

Like the misunderstood Kazan from the film, the Cube is on its way out into the bright light beyond.