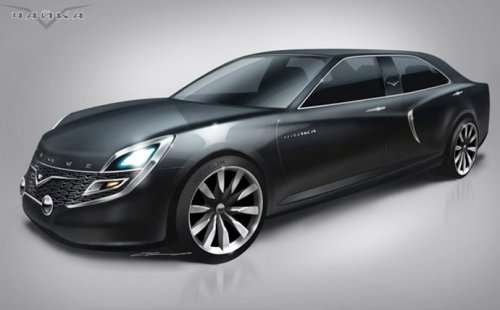 This year, a new limousine for the Russian president will be commissioned and automaker Marussia Motors and CarDesign.ru from open-sourcing the design as a contest worth $5,000 to the winner.
Advertisement

Although the winning entry into the contest will not be the design chosen for the president's limo, the cash award of 150,000 rubles (about $5,000 USD) and rewards for two other runners up will be worth it to the designers involved. The contest was spurred, however, when Putin announced he was unhappy with the ZiL-41 limousine presented last year and wishes to have a replacement.

So far, dozens of designs have been entered into the Auto for the President contest with over 100 of those being accepted under the competition's rules. Set up by Marussia Motors through the Russian Web portal CarDesign.ru, the contest is open to anyone over the age of 18 who thinks they can design a more modern-looking ride for President Putin.

The rules are simple: the design must be "real world" (meaning able to be built today), it must convey the importance of the president, and it should include either no nameplate at all or be under one of the Russian plates of ZiL or Chayka (4ANKA). Our example here is by Marcell Sebestyen and is based on the Cheyka GAZ-13, touted as the most luxurious Russian car ever made. One of the alternate winners for a runner-up prize will be chosen on "perspective design" qualities, which allows for a more open interpretation of "real world" options.

Most of the notable entries so far follow the general theme shown in Sebestyen's offering, though with varying levels of sophistication and base model design cues. The deadline was yesterday and the winner will be chosen on May 1st. The winning design will be used as the basis for a planned series of presidential cars that Marussia plans to offer. So although the winner may not have President Putin riding around in his or her winning design, it's possible that other world leaders may be.

Entries have included designs based on classic Russian automobiles, based on the current limousine in use, and on cross-branding efforts with Russian technology brands like Sukhoi. Many designs based on the ZIS-110, GAZ-13 Chayka, current Marussia sport utilities, and more. Entrants range the gamut from professionals to students to amateurs from around the globe, though most are Russian.