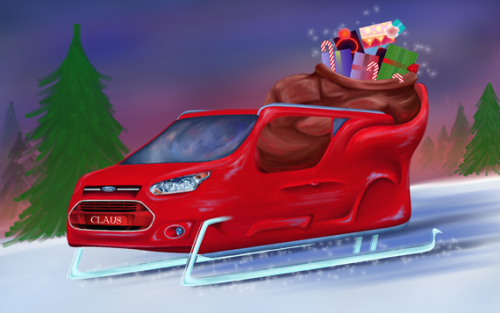 The Conspiracy behind Santa's sleigh and the Ford - Lexus conundrum

The very fate of Christmas as we know it could be in the balance as the conspiracy around the conflicting reports from Lexus and Ford deepens.
Advertisement

Who took the sleigh? What happened to the reindeer? Is Santa experiencing a mental breakdown? Who will really be providing the sleigh replacement? Is Santa fit to drive it? Can he legally do so in all jurisdictions? Where's Rudolph in all this? Will Christmas ever be the same?

These questions and more plague the world as the mysterious North Pole keeps silent, refusing to answer questions from the press. Independent researchers and journalists from around the world are delving into the mystery, but they seem to be finding more questions than answers. Here is a synopsis of the facts and theories we have so far.

The Ford Connection
Yesterday, Ford announced that they would be providing Santa with a replacement sled, last minute, designed around their Ford Transit Connect small van. They claim that "Santa Claus joins vehicle buyers who rate fuel economy their No. 1 purchase reason by selecting the all-new 2014 Ford Transit Connect Wagon for his next sleigh." It's unclear whether the van will be used this year or next, however, and whether this will be a replacement for the EcoBoost-powered sleigh they reportedly provided him last year (see here). An artist's rendition of the purported Transit Connect sleigh is at right.

Ford did not respond for comment before press time. We did, however, speak with well-known investigative reporter and documentary filmmaker Morpulento Moore about Ford's claims.

"This is clear evidence that Santa, the beloved and iconic Christmas elf who brings joy to so many millions of children every year, has been usurped by corporate interests. He's clearly sold out and will now pimp himself to anyone and everyone who flips him a few coins. The Reindeer Union, North Pole Chapter, has gone on strike two years running over Santa's increasing greed and refusal to renegotiate contracts to trickle down some of that newfound [sic] cash. In fact, Santa has clearly turned bigot as he's giving big salary increases to the elves, but refusing the four-legged help any bonuses. My inside source says that the North Pole is becoming worse than a weekend meeting at Gold Sacks."

Mr. Moore is not alone in these accusations. Bonstruo Grahamcracker, a prominent religious leader and evangelical, has said much the same. In an article penned for the New York Watch, Grahamcracker said "For years now, Christmas has been sold up the river. We've seen commercial, corporate, money-hungry interests thieving the true meaning of the holiday as its ringleader, Santa Claus, sells himself like a common whore on the street. This year, my sources high up tell me, he's even sold off his reindeer, renting them out as fertilizer makers for a Russian farming outfit in the Ukraine, and is replacing them (again) with a corporate logo on wheels. Yeah, it is written, that when the end times are near, the jolly one will sell himself to Babylon. We are seeing proof of the End Times!"

The Lexus Angle
Conflicting with reports from Ford, or perhaps intertwining with them, are reports that Toyota's Lexus brand is offering Santa a hybrid sleigh. Torque News' intrepid Don Bain got to the bottom of that story (see it here) when it broke on Thursday. Could the Lexus be the sleigh of choice for 2012?

Popular commentator and theorist Patriootti Beck has an idea how this ties together:
"It's a clear liberal conspiracy to destroy the true meaning of Christmas. The Marxists in the Reindeer Union have convinced the otherwise fine, American reindeer working for Santa, that they should demand more than the Claus can give. In response, Santa has had to do what he can to save Christmas and continue on with his important charity work that benefits so many children in America and around the world. To do this, he's had to turn to honest, hard working American businesses. Ford, of course, stepped in last year and will again next year, if need be, but in order to try to raise public relations with the left, Santa had to go with a hybrid this time and of all the companies making hybrids, we know that Toyota has the strongest background. The made-in-America, by the way, Lexus LFLC will do the job. It's all the unions. Here, I'll draw it out on the blackboard.."

This information seems to, more or less, jibe with the conflicting reports about the cars Santa may or may not be using. Of course, if Santa is to be driving a car instead of a traditional reindeer-drawn sleigh, will that impede him due to traffic laws and vehicle registration requirements?

The Law and Santa
As we understand it, an early resolution of the United Nations, when it was still called the League of Nations (this was when infamous Clark Kent was its chairman), exempted Santa's reindeer-drawn sleigh from all motor vehicle laws and regulations on or during the 48 hour period between December 24 and December 25, local time. Unfortunately, the law specifically exempts only his "reindeer-drawn sleigh." That could create legal issues for the bearded flyer.

Barky Allen at the U.S. Bureau of Car-Related Automotive Translicensing (B-CRAT) spoke with us by phone on this important subject.

"Our agency and agencies like it around the world all come together during the holiday season to ensure that Mr. Claus has unimpeded access to the world on Christmas Eve. Of course, with today's threat of international terrorism, we have to take extra precautions to ensure both his safety and the safety of communities across the planet. If the technology at Mr.Claus' disposal were to fall into the wrong hands, the results could be catastrophic. Which is why we've petitioned Congress for a three-fold increase in our budget as well as a more robust liaison with the DOD [Department of Drones] and DHS [Department of the Happy State]."

So it appears that Santa will get a waiver on legal requirements should he really be driving a Lexus- or Ford-powered sled.

The Mayan Tie-In
Another theory is proposed by a man known as Big Hair Guy from the History Station's popular television show Old Etraterrestrials. His proposal, spelled out on his website UnidentifiedFlyingSleds.net, involves many leaps of logical conjecture, but does appear to make sense.

The idea is relatively simple and involves mistaken cultural interpretations by archaeologists when interpreting the Mayan calendar that has gained so much attention of late. The calendar, archaeologists say, ended on December 21, 2012. This, according to Big Hair Guy, is correct, but it does not necessarily mean that specific day. Instead, it ties in with what the Mayans called the Santiclausican, which archaeologists misinterpret to mean "solstice." In fact, it's not the Winter Solstice at all, but is a direct reference to Santa Claus who, in Mayan times, visited the world on the Winter Solstice rather than on today's traditional fixed date of December 25.

Therefore, the end of the world is not on December 21st, as many believed, but is instead on Tuesday, December 25, 2012, the last day of the Mayan calendar's Santiclausican - Christmas Day.

So all of the argument over who's replacing the sleigh is just PR to promote last-minute sales before the world ends. The truth is, Santa and his reindeer don't plan on making any trip this year, says Big Hair Guy, but instead are going to ride it out in their secret under-ice bunker on the pole.

Another popular commentator on similar subjects, Hollywood actor Thom Drive, agrees and says that this explains the so-called "seed vault" that has been built. It's not a vault at all, but instead is a bunker for Claus and his close friends. He remarked to David Mailman on his late-night show that "..clearly they are planning for something big. Luckily, as a Sciencelogian, I don't have to fall for that crap."

So What's Going On?
The truth is still uncertain. With no clear answers from Santa Claus and nothing more than hearsay and conspiracy theories to go from, the truth is still anyone's guess. Rest assured, however, if there is a bottom of it to get to, we will be there.

From all of us here at Torque News, have a great holiday!