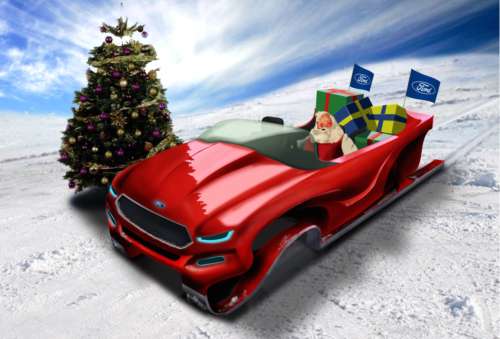 EcoBoost powered concept sleigh would be greener than reindeer
Advertisement

The Ford Motor Company has designed an EcoBoost powered concept sleigh for Santa Claus. They say that their 1.0 litre EcoBoost engine could drastically reduce Santa’s carbon footprint, while giving the reindeer a break. According to Ford car designer Paul Wraith, “They may look cute, but Santa’s team of nine reindeer create a staggering 214,670 tons of CO2 equivalent emissions each year, so something had to be done to help him re-discover his greener roots.”

Yes, they’ve actually done the math. For those of you who like that sort of thing, I’ve put it at the bottom. They claim that the concept sleigh could save 191,843 tonnes of CO2 and save Santa a bundle on fuel. They guesstimate he currently spends nearly $200 million on carrots while the EcoBoost would cost less than $20,000, a 90% reduction.

According to Mrs. Claus, “I am not looking forward to telling Donner and Blitzen the news, but the polar bears in the North Pole will certainly welcome the Ford EcoBoost-powered sleigh. l would of course back anything that means my husband can get home that bit quicker. Getting presents in a shorter amount of time to all the good children each year may even give him time to reconsider a few names on the naughty list. But I can’t promise.”

Besides lower cost, the sleigh also offers other benefits. It comes with active park assist, which not only parks for you but first determines if the space is big enough. Ideal for rooftop landings. Also installed are door edge protectors, to prevent scratches from chimneys, and SYNC voice-activated technology, allowing Santa to navigate with GPS, listen to music, and keep in touch with the North Pole. EcoMode will let Santa know how green his driving is, while Active City Stop & Blind Spot Information System will help him avoid airplanes.

“Our tongue may be firmly in cheek as we launch this sleigh design, but our heart is in the right place,” Wraith said. “At Ford, we’re dreaming of a Green Christmas. We’re already thinking of the concept sleigh mark II. With electric vehicle battery technology developing all the time, we are keen to get to work on a zero-carbon version of our sleigh.”

Carbon emissions
All numbers have been converted from metric and are approximate. Given that Santa and his reindeer need to travel 125 million miles to reach 267,300,000 houses, and that an average reindeer travels 3,000 miles in a year, emitting 55 pounds of methane, then Santa’s team of reindeer are emitting 10,300 tons of CH4, equivalent to 240,000 tons of CO2.

The 1 litre EcoBoost, which is small enough to fit on a sheet of paper, by contrast would only produce 25,000 tons of CO2. And that’s using the 125PS version, the less powerful 99bhp version would save another 1,000 tons or so.

Fuel costs
Santa’s reindeer travel in one night the equivalent of 15,169,497 days of travel by an ordinary reindeer. An average day’s food for a reindeer is 12 pounds. Multiply that by the 15,169,497 days of travel and you have 182,033,964 pounds of food. That works out to something like $191 million dollars. The EcoBoost by contrast would need 2,650,000 gallons of fuel. They’ve used British prices to calculate the cost, which comes out just a shade over $19 million dollars. If Santa gassed up here, it would cost a lot less.