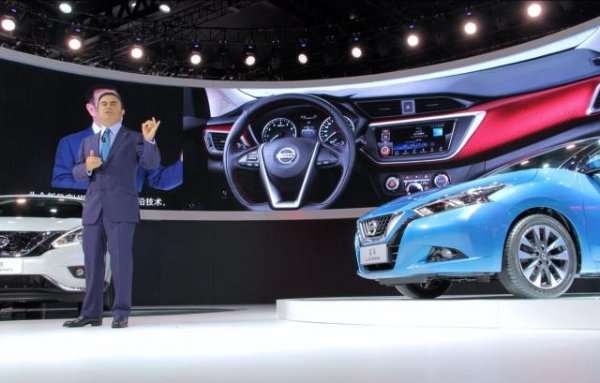 The four brands within the Nissan-Renault Alliance are all converged in China and with a new factory opening its doors this year, CEO Ghosn says that the Alliance is expecting the Chinese market to be its biggest growth sector. Find out details in video here.
Advertisement

Speaking at the Shanghai Auto Show last week, Nissan and Renault CEO Carlos Ghosn talked about the brands' plans in China, the aggressive growth strategy he has set for Renault-Nissan in China, and why the Chinese market is so important to the Renault brand in particular. With four different vehicle nameplates being sold in the Chinese market, the Renault-Nissan Alliance faces dangers of cross-competition as well.

In the video below, which was shot at the unveiling of the new China-based Nissan Lannia at the Shanghai Auto Show, CEO Ghosn talked about the importance of China to the Renault-Nissan Alliance. In particular, Nissan sells very well there, as does the Infiniti luxury brand. Renault is gaining a strong foothold there as well and Ghosn expects it to become the fastest-growing brand in China in the next two or three years. Additionally, Ghosn talks about the way the four Alliance brands are split in the Chinese market to avoid cross-competition between them.

Venucia, the Alliance's Chinese-only brand, markets small, compact vehicles to the Chinese buyer, aiming for the urbanite transportation market as a small, portable, low-cost solution. Nissan is the Japanese brand, of course, and sells in the middle range with vehicles like the new Lannia being its main staple. Infiniti, of course, is the luxury brand and sells upscale vehicles (mostly crossovers) to the Chinese buyer who prefers statement-making luxury. Finally, the Renault brand, which would be in possible cross-competition with the Nissan brand, aims largely towards buyers looking for a European nameplate in a standard and entry-level luxury feel.

Ghosn also detailed goals for the Renault-Nissan Alliance, including an aggressive 1.3 million units for the year. With the opening of the new Renault assembly plant before the end of the year, the CEO expects that China will become a main pillar of Renault in the years to come with 2016 being a fast-paced year of growth for the Renault brand.

LG's New EV Battery Plant Is a Welcome News for Tesla
Tesla Giga Berlin's New Hurdle: It's Not Only the Gov't, but Now Tesla Itself
END_OF_DOCUMENT_TOKEN_TO_BE_REPLACED