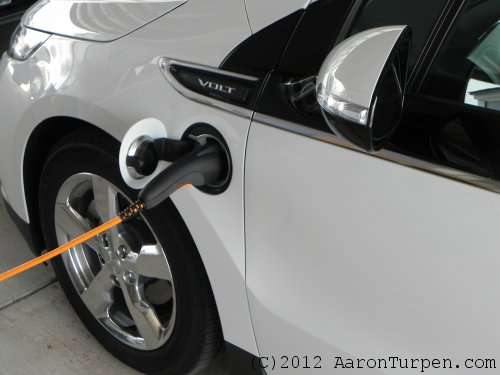 Can Electric Cars Make Gas Prices Do The Electric Slide?

How can the proliferation of electric cars on our streets serve to lower gas prices?
Advertisement

As a result of rising prices of gasoline all over the world, more and more people are starting to look for alternatives that can minimize the financial costs associated with driving vehicles. One of the obvious alternatives is the electric car. Put simply, an electric car is an automobile that is propelled by one or more electric motors, making use of electrical energy stored in an energy storage device, usually batteries, instead of relying on gasoline. Although we are a long way from having electric cars lower gas prices, there is definitely momentum building up to help accomplish this important task.

Electric cars were popular in the past, specifically during the 19th and 20th century. But advancements in technology such as the internal combustion engine and mass production of cheaper gasoline vehicles has stopped them from going mainstream. Recently, however, there has been a renewed interest in electric cars because of the current problems in gasoline prices and push-back against greenhouse gas emissions. Using electric cars can impact in two ways. You would not have to deal with the rising gasoline prices since they don’t need gasoline to produce power and you would also help in reducing greenhouse gas emissions, which are a considered contributors to global warming and possibly even climate change. By using electric cars, drivers would both be able to cut down on costs, and do their part to lessen their carbon footprint on the world.

So how can the proliferation of electric cars on our streets impact gas prices over the next several years?

This means that the rise and fall of gas prices are also affected by the amount of supply we have of the commodity, along with people’s demand for it.

From this point alone, it is quite easy to understand why the prices of gas are increasing. The natural resources in the Middle East, South Africa, and in other parts of the world from which we produce gas are already depleting. Furthermore, the population of the world is continuing to rise, thus increasing the demand even more.

China and India, for example, which have a population over 1 billion, have an expanding middle class which will have life patterns involving driving cars. China is planning to construct 42,000 miles of interprovincial express highways by 2020 in order to accommodate new cars in that country. The United States has approximately 86,000 miles of interstate highways. India is also planning to construct 12,000 miles of expressways by 2022. As more and more cars drive on those highways, the more they consume gasoline, thus making the demand for gasoline even higher. The demand for gasoline, therefore, plays a crucial role in the behavior of gasoline prices.

In addition to these destabilizing forces, you also have to keep in mind the unstable nature of the Middle East and the fact that it is possible that there could be a major worldwide interruption in supply in the coming years. To the extent that nearly all developed nations, and most developing ones as well, have an addiction to oil and refined petroleum that will not be broken any time soon, the mere utterance of this scenario in the media or in elite circles has been thought to correlate directly with an adverse effect on stock markets and the economy as a whole.

Where do electric cars fit in all of this?

According to the Law of Supply and Demand, there are only two ways by which we can lower the price of a commodity. The first way is to increase the supply and the second is to decrease the demand. The former is obviously not a viable option because we can’t generate natural resources. Although they are able to multiply naturally, it takes thousands or millions of years before they do. So the only option that we have is to lower the demand.

How can we lower the demand for gasoline?

By logical analysis, the only reason that a commodity has a strong demand is that it fulfills a certain need. Right? Therefore, in order to lower the demand for the commodity, we need an alternative which could meet that need. In this case, we’re talking about transportation. This is where the importance of electric cars comes in.

Electric cars, if implemented in a broad fashion over a period of time, have the ability to lower the people’s demand for gasoline. Of course, such a transition would not be able transpire instantly, years and billions need to be invested to create infrastructure that will support an entire fleet of electric vehicles. It is going to take time before the demand lowers to a significant extent, but at least we can move toward the goal with a trajectory that will ensure we will one day alleviate our incessant need for gasoline.

Although electric cars certainly have their benefits, they do come with costs as well. While electric engines do not use gasoline, they make use of electric power coming from batteries. So when you have an electric car, the need for gasoline is taken out of the picture, but there are still obstacles and complaints to overcome.

The first complaint is about the price. Prices of electric cars are generally more expensive that those of gasoline cars. The main reason for this is the high price of batteries. Because of this, people are dissuaded from purchasing electric cars. That is why the mass transition from gasoline to electric cars is slower than expected. A survey conducted by Nielsen and The Financial Times shows that 65% of Americans and 76% of Britons are not willing to pay a higher price for an electric car.

However, car companies such as Tesla Motors have already ventured into some alternatives such as using Laptop Battery Technology, which is 3 to 4 times less expensive than the regular electric car batteries, and this could potentially drive down the cost of electric cars. Also, the government has already pitched in and assisted in this endeavor by providing federal funding and tax incentives for car companies that are working on an electric strategy. President Obama has pushed a $2.4 billion grant program to produce next-generation batteries that could lead to 500,000 batteries a year by late 2014. So although there is still a journey ahead, steps are consistently being taken to curb the prices of electric cars. It is also reasonable to assume that with research and development, car companies will be able to come up with new technologies to make the prices a lot cheaper in the future.

Important to note is that the financial problem is not exclusive to electric cars. The price of gasoline is continuing to reflect the fact that global uncertainty and decreasing supply are a fact of life. The problem of paying a higher price for an electric car is a one-time hurdle that requires an investment in infrastructure and hardware. Once the leap is made, you can use domestically-produced electricity to keep it running and periodic battery replacement becomes the primary expense. The running and maintenance costs will be significantly lower than that of a gasoline car. Nissan estimates that the 5-year operating cost for an electric car will be $1,800 versus $6,000 for a gasoline car.

If you still have other issues regarding pure electric cars, there are hybrid cars available that make use of both internal combustion engine and electric motors. The presence of the electric powertrain is to make the car better in terms of fuel-efficiency than conventional cars. So it still makes use of gasoline but to a less extent as compared to that of a conventional car.

In conclusion, the growing number of electric cars on our street can affect the price of gasoline prices by diminishing the people’s demand for gasoline. It may be able to lower the prices some time in the future. We are moving in the right direction, but are still a long way away. Problems exist which we need to address in order to make the mass transition to electric cars a lot smoother, but the result will be worth it when we are using less of our wealth on transportation, and more on other areas that positively affect our quality of life.

Don Bain wrote on May 31, 2012 - 6:32pm Permalink
Is it possible oil companies don't want us buying electric cars and so are keeping oil prices low artificially - or outside the laws of supply and demand somehow?!? Where are all those conspiracy theorists anyway?
Aaron Turpen wrote on June 1, 2012 - 2:27am Permalink
Actually, you're sort of on to something, Don. :) What simple supply-demand market analysis ignores is the fact that there are very few markets that are not manipulated from the outside (usually governments, who go beyond a referee role and become market forces instead). Imported oil is artificially cheap for several reasons, including our military globe-trotting and the implied threat of invasion for those who don't cooperate. In other markets, government interferes to bring prices down for things like ethanol, wind power, favored science, many foods, etc.

Elon Makes a Cybertruck Statement With an Action, But Quiet in Words
Tesla's Record Month in China: Doubled Registrations in March 2021
END_OF_DOCUMENT_TOKEN_TO_BE_REPLACED