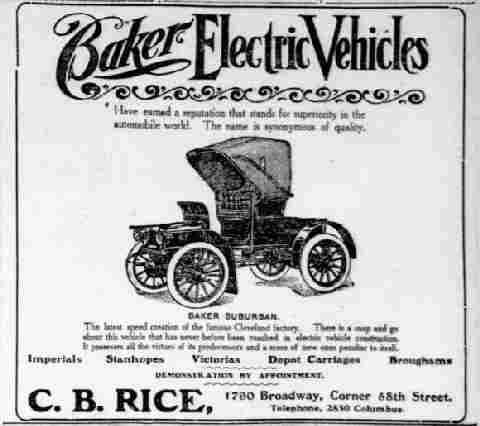 Electric cars are so last century

Electric vehicles have been around a lot longer than many might think. Here is a look at some of the greats from the dawn of automotive.
Advertisement

Electric cars are as old as automobiles themselves. Ever since the invention of the horseless carriage, inventors have been designing and building electric vehicles. Even the oldest models could have range capabilities of 40 miles or more and most were rivaling even the most sophisticated of combustion engine cars of the day.

Looking back, we can see that automobiles have come a long way. Electric propulsion lost out to gasoline and diesel thanks to the better range, higher speeds, and more robust capabilities that those fuel options provided for cars in the early part of the 20th century. Until the combustion engine had undergone the evolution necessary to improve its performance - not to mention the invention of the crankless starter - electrics were often the autos of choice.

Let's look back at some of the greats from the earliest days of automotive. Follow along in the picture gallery (linked at right) as we remember the classics of EV technology and through the advertising that promoted them.

Waverley
This company opened its doors to automotive in 1898 and was in business until 1916, becoming one of the best known of the electric car manufacturers of the day. Originally building bicycles, the company quickly switched to electric cars when it consolidated with the American Electric Vehicle Company. Based in Indianapolis, Waverley was owned by tycoon Albert Pope who changed its name to Pope-Waverley in 1904 as part of a wider branding move within his bevvy of businesses.

Waverley was the Alfa Romeo of its day, building some of the most handsome and luxurious vehicles of the period. The Four-Passenger Coupe was one of the company's best selling electrics and was one of the first "convertibles" of the day, as its top could be removed and swapped for various options. Priced at over $2,000, it was a car only the wealthiest could afford.

Baker Motor Vehicle Company
Founded in 1899, the company enjoyed success as an electric car maker, selling its first production model to Thomas Edison, who'd designed the nickel-iron batteries it used. That car was the Suburban, pictured here in its 1909 form as the Runabout. It sold for about $850 and featured an "armored" wooden frame and 3-speed transmission, giving it a top speed of 14mph - quite zippy for that time period.

The company produced several other models after that, all based on the Suburban two-seater and the Stanhope luxury carriage. By late 1910, the company was producing several top-dollar cars including the Coupe priced at $2,800 with an "interchangeable on chassis" swap-out called the Queen Victoria as a $300 option for the ultimate in opulence.

Columbia Automobile Company
Another venture of Albert Pope, Columbia was a joint venture of Pope Manufacturing Company and Electric Vehicle Company. The business started in 1899 and went until 1910, when it was acquired by the United States Motor Company. Columbia was based in Hartford, Connecticut and produced several two- and four-seat cars, including the pictured 1906 Victoria Phaeton, an upgraded version of the earlier Electric Runabout, the first car to exceed 1,000 sales in the U.S.

In all, Columbia had about 20 models to choose from, including industry-specific commercial vehicles for police, taxi use, and even some buses.

Detroit Electric
A late-comer to the electric car revolution, it was also one of the longest-lived companies of the lot. Opening its doors in 1907, it was a brand of the Anderson Electric Car Company in Detroit, Michigan. It ran until 1939, producing some of the most iconic electric cars in American history. The company made its name and set itself apart by marketing towards specific demographics, highlighting the down-sides to combustion vehicles like smoke, noise, and crank-starting (which was dangerous).

The cars sold mainly to well-to-do women, doctors, and others who worried about hurting themselves with crank starting a car and who didn't enjoy the loud noise and smoke associated with most horseless carriages of the day. The ad here shows how this targeted advertising was done during World War I, featuring a 1916 model.

Rauch & Lang Electrics
Starting in 1905, this company eventually merged with Baker Electric in 1916 and then changed its name to Raulangs in 1919, eventually going out of business in 1932. It was originally based in Cleveland, Ohio and then moved to Chicopee Falls, Massachusetts in 1920 when the company was purchased from its founders by Stevens-Duryea. The company made a variety of automobiles, trucks and buses throughout its history, producing 500 autos per year by 1908 and building the famed Owens Magnetic in 1916.

These are just a few of the hundreds of electric vehicle makers that popped up (and died out) around the turn of the century. Some were former coach builders, others were bicycle makers, and still others were just blacksmiths with a tinkering bent. All of them built fun, innovative, and high-tech cars to sell to an eager automotive-loving public.

For Some Former Daimler Managers Daimler Is Authority, While Tesla Is Like a Startup
How Daimler Unintentionally Subsidizes Tesla Giga Berlin
END_OF_DOCUMENT_TOKEN_TO_BE_REPLACED