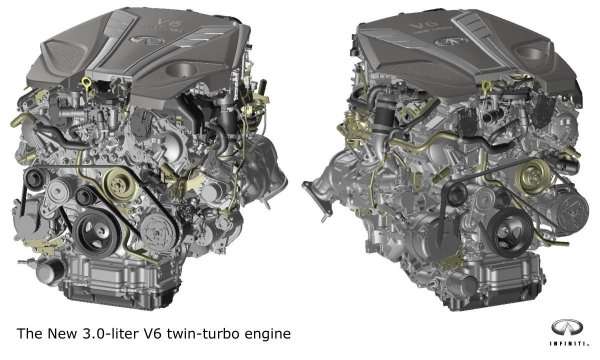 When Infiniti unveiled the heavily updated Q50 sedan this week, the biggest changes were all under the hood. Including a completely new engine series for the premium sedan.
Advertisement

This is the most advanced engine that Infiniti has ever offered. It includes technology derived from the company's Formula One racing heritage and its advanced engineering department. The new 3.0-liter V6 offerings in the 2016 Q50 are completely new and different from the powerplant in previous years' models.

When Infiniti unveiled the new Q50 last week, most were awed by the huge improvement to the top-shelf Red Sport 400 trimline. And well they should have been. The Q50 may not have changed much in appearance from 2015, but the 2016 Infiniti Q50 definitely had a lot more going on under its hood.

The 3.0-liter V6 twin-turbo engine is the latest in Infinit's engineering for improved performance and better fuel economy. Since its beginnings, Infiniti has utilized V6 engines as its primary power source for most of its lineup. Infiniti has promised that these new VR engines will be seen in other models moving forward, including (we guess) some 2016 revamps that haven't been announced yet.

The VR30 is a 3.0-liter V6 twin-turbo that is replacing the VQ series. The VQs will be hard to beat, given their wins as Ward's 10 Best Engines for 14 years running. The specs on the new VR shows that it may be a winning replacement, however.

Before we talk about those turbochargers, let's look at the other technologies employed in this new VR engine.

The aluminum engine block is "square" with bore and stroke being equal (86mm each). This means lower mechanical friction and a faster rev response from the engine. This also accounts for the broader range of horsepower and torque rpms, especially at the mid-range area where passenger car engines tend to spend the majority of their time.

Advanced timing control has been engineered using an electric motor in the valve timing system to increase throttle speeds and offering much better cylinder combustion control. Some enhanced programming and an advanced water-cooled intercooler aid in better combustion rates. The use of spray bore coating allowed Infiniti engineers to lighten the engine block as well, further helping aid power to weight and to reduce cooling requirements for the engine. Speaking of which, the 400 hp upgrade adds another water pump to increase coolant flow.

The real muscle happens in the boosters, though. The twin-turbo system means that the Q50's peak torque is delivered at low rpm rates. Optimized turbine blade designs and a new turbine speed sensor allow the turbos to spin at up to 220,000 rpm (steady) and 240,000 rpm (transient). The turbo speed sensor allows the turbochargers on the 400 hp option to boost power by up to 30 percent. An electronic wastegate actuator finishes the exhaust control to give precision to the turbochargers.

The All-new 3.0-litre twin-turbo V6 engine is due to enter production during 2016 and will be manufactured at the company’s powertrain plant in Iwaki, Fukushima, Japan.