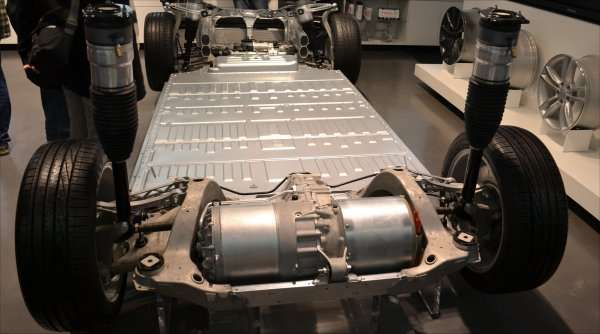 In analyzing the Gigafactory plans, it's clear the CEO Elon Musk has no plans to improve the batteries themselves. So the big "breakthrough" in battery tech that EV enthusiasts always claim is coming anytime now? Well..
Advertisement

One thing we commonly hear from the "electric vehicles are the only future" crowd is the mantra that battery technology is going to get more energy dense, lighter, and cheaper because the next big breakthrough is just around the corner. To read EV blogs and forums, you'd think that every small find in the lab is the key to the next piece of battery excellence. Yet the biggest name in electric vehicles doesn't seem to think that this is the case.

Elon Musk, CEO of Tesla Motors, has been talking a lot about the company's plans for Gigafactories to build battery packs for its vehicles as well as to sell to small grid suppliers for storage solutions. Reading between the lines of Musk's statements, though, seems to indicate that the most-recognized proponent of electric vehicles doesn't think batteries are going to change much over the next few decades.

Any day now, we're expecting Tesla Motors to announce the location (or locations) of their first Gigafactory and give a time frame for its ground breaking and construction. At this point, it's likely to be in one of three or four U.S. states and, according to Musk's plans, will be capable of producing about 50 gigawatt hours of batteries per year at a cost of about $5 billion to build the facility. Musk says that those batteries will power about half a million vehicles with a few batteries left over to supply renewable energy storage needs in the emerging solar and wind power small grid and perhaps even consumer markets.

Yet in all the talk and announcements made about that factory, not once has Musk said that batteries would become exponentially better than they are now. In fact, his math seems to say that he has no expectations of the batteries improving by more than a couple of percentage points in terms of energy density and EV range payoff. The base version of the third-generation Tesla, which will be the company's affordably-priced, "everyman" car, will have a range of roughly 200 miles using a battery pack that is 20 percent smaller than the current Model S base offering. Doing the math shows that this means the pack is not expected to be more energy dense; the numbers being used are with current battery tech.

Some could see this as mere conservative thinking from a CEO who doesn't want to jump the gun on future possibilities and potentially lose out when predictions fail to become reality. Were this anyone but Musk, that might be the case. But Elon is well-known for his far-thinking, far-out ideas and for being unafraid to air them in public.

Musk's only real prediction on the battery front has been that costs for Tesla will drop by 30% when they're making them themselves and in large quantities. Some have questioned this math, of course, but economies of scale could prove him to be correct or at least very close. It's arguable that Tesla currently has the lowest cost per kWh in the automotive lithium-ion industry, which would explain why other automakers contract with them to create batteries for limited-build vehicles like the RAV4 EV. The widely-cited "$400 per kWh" assumption by the press is probably based purely on the cost difference between battery offerings in the Model S, which is arbitrary. We won't dive into this argument, but a Green Car Reports piece written last year dissected it well (see link below).

What's important to our discussion is that nowhere in that mention of cost reduction did Musk mention anything about increased density through technology breakthroughs. His mention of the subject focused entirely on economies of scale, direct purchases from raw materials suppliers to cut out middle men, and improved supply chain efficiency.

Most of the battery breakthroughs taking place in the lab recently have been either impossible to reproduce at scale or are breakthroughs in cost reductions and manufacturing rather than energy density. Even if a mad scientist somewhere out there were to come out tomorrow with a breakthrough battery that doubled energy density and was manufacture-ready, it would be decades before any real-world CEO would embrace the technology for use in automotive until the tech had been thoroughly and exhaustively tested. The general consensus among battery experts, chemists, and automotive engineers is that batteries for vehicles are improving, but only at a steady, very slow pace.

Instead, the foremost proponent of electric vehicles is clearly predicting that batteries will largely remain the same, which means that if an EV is to truly replace a gasoline equivalent vehicle on all fronts (size, capability, range, etc), it won't be because batteries suddenly get better. This further proves predictions of EVs being a fraction of the overall market for the foreseeable future. Much to the chagrin of the EVangelist, I'm sure.