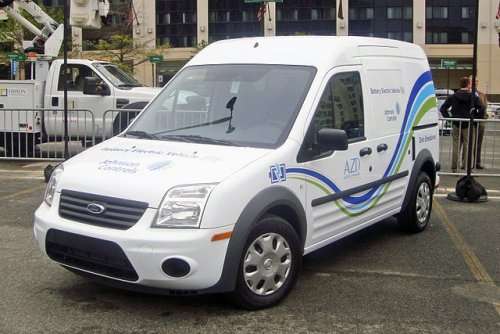 The company behind the electrification of the Ford Transit Connect Electric failed to receive approval from the Ontario Securities Commission for a public stock offering and has filed for bankruptcy protection, closing 3 of its 4 facilities and laying off 120 American green jobs.
Advertisement

Azure Dynamics, a company based in Vancouver, British Columbia and Oak Park, Michigan, has filed for bankruptcy protection in both Canada and the United States. In doing so, it has ceased all production and closed three of its four facilities, keeping only the Vancouver headquarter offices open.

The closures mean 120 green jobs lost as workers enter the unemployment lines in the U.S. and Canada. They also mean that Ford Motor Company's future commercial vehicle electrification plans may be in jeopardy as Azure was the provider of electric conversions and components for the Ford Transit Connect Electric (in both North America and Europe) as well as conversions of the Ford F-550 series of heavy-duty trucks.

Azure had filed for permission to create a public stock offering through the Ontario Securities Commission (OSC) to raise funds to continue operations, but the application was rejected on March 23, leading to an emergency Board of Director's meeting in which the decision was made to file for bankruptcy protection in the U.S. and Canada - under the Canadian Companies' Creditors Arrangement Act (CCAA) and under Chapter 15 of Title 11 in the U.S. Bankruptcy Code.

Azure's press release regarding the bankruptcy and closures soundly blames the OSC, stating:

In light of the fact that the Company’s current liquidity position leaves it without sufficient time or cash resources to pursue its right to be heard before the Director and, if necessary, to appeal any decision of the Director following such hearing to a panel of commissioners of the OSC, the Board of Directors has determined that the Company’s best remaining alternative is to pursue a restructuring under the protection of CCAA.

Other statements from the company's Vice President of Marketing, Mike Elwood, to Fleet Owner Magazine encourage optimism despite the closures and restructuring. The company hopes to return quickly and resume fulfilling contracts.

Those contracts include service agreements on current vehicles on the road, including over 1,000 Balance Hybrid trucks as well as the hundreds of Ford Transit Connect Electric trucks produced so far. Future orders of the Transit Connect Electric are also in question. Restructuring through bankruptcy could mean making all contracts, including service agreements, null and void, leaving many commercial green vehicles consumers in the lurch.

Ford has not issued a statement regarding the Azure bankruptcy filings or how it will affect their operations and contracts.