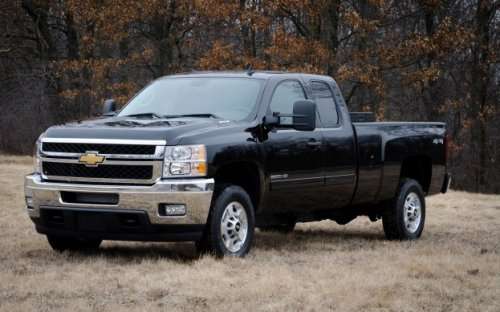 If you are in the market for a full-sized, gasoline-powered pickup truck and need four wheel drive as an option, then finding something that is also fuel efficient to save you at the pump is probably something you think isn't compatible. You'd be wrong.
Advertisement

Trucks are getting more and more efficient as technologies in engines and weight reduction help pickups become more capable in the fuel sipping department. Here are the 5 best 4WD truck options for gasoline efficiency.

2012 Chevrolet Silverado 15 Hybrid / GMC Sierra 15 Hybrid
With a combined 21mpg in gasoline, these trucks are some of the best in terms of balanced power and efficiency. Their 8-cylinder, 6.0-liter engines put out useful power through their variable gear ratio automatic transmissions. Their only down side is cost, at $43,000 to $50,000 depending on options.

2012 Ford F150 FFV
This flex-fuel vehicle gets 18mpg combined with regular gasoline and has the option of using full E85 ethanol for a 13mpg combined efficiency (due to the lower energy density of ethanol). The non-FFV F150 4WD gets 17mpg combined. The sticker price varies widely, starting at about $28,000 for the EcoBoost F150 and going up over $50,000, depending on options. The F150 has been America's best-selling pickup for years. Of those trucks on our list here, the F150 has the highest weight hauling and towing capacity.

2012 Honda Ridgeline
With its popular styling, the Ridgeline gets 17mpg combined and, despite being one of Honda's worst-selling models, is still a common sight on American roads with an MSRP of about $30,000 base.

2012 Nissan Frontier
Not as popular as some other trucks on our list, the Frontier is badly in need of restyling. Still, at 17mpg combined, it is in competitive range with its contemporaries and its sticker price of $26,000 and up is in the ballpark.

For those that need a gasoline or flex-fuel truck that includes 4-wheel drive, these are your best options for fuel efficiency. It should be noted that the more expensive diesel options can usually get 5-10 miles per gallon more than the gasoline equivalent (especially under load). So far, natural gas for consumer trucks is not yet available from the factory, though there are commercial options from General Motors and Ram Trucks.

Toyota's First EV Will Have a Name of BZ: Toyota BZ
First Videos From Inside The Boring Company's Las Vegas Loop
END_OF_DOCUMENT_TOKEN_TO_BE_REPLACED