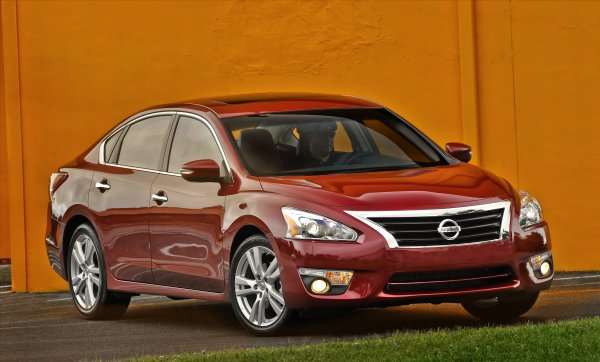 Word in the hall is that Nissan plans to make big changes to the 2016 Altima, which will debut soon. Facing competition from segment leaders, the Altima, Nissan's largest-volume vehicle, will get some serious upgrading.
Advertisement

Sometime this year, earlier than later, Nissan will unveil the 2016 Altima to the public. The volume-leading sedan is the company's best-selling car, but with huge updates from rivals in the midsize segment, Nissan is planning significant updates to the car to stay competitive.

Although details on those changes are not clear, it's obvious that with the update of segment leader Toyota in the Camry and with new competitive entries from Chrysler and others, Nissan will need to freshen the Altima substantially to stay competitive. Speaking at the Detroit show, Pierre Loing came right out and said that in the highly competitive midsize segment, the Altima, updated just two years ago, is already feeling dated. Loing is the Vice President of Product Planning for Nissan North America and is basically the top dog for U.S., Canadian and Mexican operations.

Midsize sedans make up about two million vehicle sales per year in the United States and is considered the largest single vehicle segment in the market. To do well in midsize is to do well everywhere, the industry knows, and the Nissan Altima has done well, gaining market share consistently since its 2013 debut in the current-generation. Now up for a midcycle refresh, the 2016 Altima is going to see more changes than might be expected, says Loing.

Citing the excellence of the competition in the midsize field, Loing said that it's difficult to continue growth in the segment, but that Nissan is committed to doing so. Having gained about five percent last year, the company has a lot to live up to. The Altima is already performing well on several metrics which are critical to the midsize sedan market: fuel economy and interior comfort.

Although no specifics were given by Loing, we can make guesses based on general trends in the segment. Updates will likely focus on styling and trim level options, with more standard offerings being the norm. Higher refinement is the trend now, with hood creases and bodywork being a major part of today's sedan. Nissan may also debut a new upgrade for its infotainment system, given the Altima's status as a flagship for the company. Options only available on the Maxima, like dual panoramic sunroofs, may also be seen as a way to set off the Altima from others.

Whatever the updates, which Loing says will "be significant," we can expect to find out what they are in the very near future. Possibly at the Chicago or New York show.