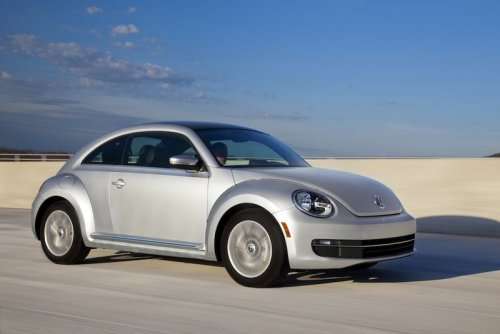 Volkswagen is bringing back the diesel option for the popular Beetle (aka Bug), this time with an all-new TDI clean-diesel system that sports a 29mpg city and 39mpg highway efficiency.
Advertisement

Unveiled at the Chicago Auto Show, VW has now promised the TDI Beetle will be in North American showrooms this summer as a 2013 model. Pricing has not been announced, but will come closer to launch. The TDI will join the 2.5L and the Turbo on showroom floors. Those gasoline models have a 22/29 mpg city/highway rating, for comparison.

When the new Beetle was launched in 1998, it came with a 1.9L turbocharged four-cylinder Pumpe Duse injected diesel option, but had few takers thanks to a lot of noise complaints and vibration issues. The diesel option was nixed in 2006 and most believed it would never return. Now, VW is showing a re-tooled, re-vamped, more efficient diesel engine with much lower emissions. The new TDI option is based on VW's recent improvements in its overall TDI engine developments throughout its product line.

The new engine is a 2.0-liter turbocharged, common-rail, direct-injection Clean Diesel engine delivering 140 horsepower. The addition of the common rail, replacing the Duse, and slightly larger capacity (1.5mm additional bore width), engine noise is significantly reduced. Other additions include a cast-iron cylinder block, aluminum-alloy heads, forged steel crankshaft with 4 counterweights rather than 8, and annular piston channels to spray oil to help cool piston rings. All of this adds up to more efficiency and lower noise and vibration.

Several other mechanical improvements in the air intake system, turbocharger, and high- and low-pressure exhaust gas recirculation mean better performance and much lower emissions. Three catalytic converters, each specialized in a different element, and a particulate filter finish off the exhaust scrubbing systems to reduce emissions to well below emissions requirements in all 50 states.

The engine can be mated to either the 6-speed manual that is standard with the Beetle or to the optional dual-clutch DSG 6-speed automatic. The dual-clutch system allows the transmission to pre-select the next gear and bring it up to speed for optimal shifting without timing losses. Shifting from one gear to the next takes less than four-hundredths of a second.

The 2013 VW Beetle TDI Clean Diesel has three trim lines: TDI, TDI with Sunroof, and TDI with Sunroof, Sound and Navigation. All three have the TDI's exclusive alloy wheels, additional exterior chrome, and TDI badging to differentiate them from their gasoline brethren.