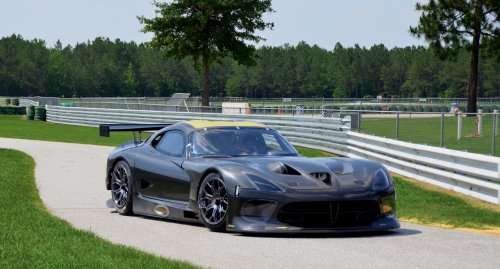 The SRT Motorsports Viper GTS-R has completed its first track test in South Carolina. Team driver Marc Goossens was captured on video (below) putting this hot new race car through its paces.
Advertisement

This first test of the new Viper racer was conducted at the Caroli Motorsports Park in Kershaw, South Carolina by driver Marc Goossens. The SRT team then answered questions to Chrysler about the run, which were put out in a press release this afternoon.

The video below shows clips of the 2013 Viper coming out of the garage, hitting the track and going through some turns. The engine is clearly audible as the driver presses the GTS-R along the run, preparing for the car's debut at the American Le Mans Series GT later this year.

Goosens is quoted by Chrysler as saying "We had a lot of expectations there since we were all so motivated to go ahead and drive it; it did what we expected. It responded in a very positive way; it was a pretty good first test that we had there.”

He went on to state that the main objectives of this first run test were to do a full systems check and see how some new components would handle the pressure of a real-life GT run. Further tests will put more miles and stress on the car, further testing those components. He called this first run a "real shakedown" and said the car did better than expected with no serious problems at all.

Then Goosens answered questions about his impressions of this new version of the Viper and his favorite likes. “It’s definitely the handling. We all expect to have good power from the engine; you can feel it on the straightaway. The car has great potential in any type of racing situation. But what amazed me was that we had everything together when it comes down to electronics in the car." Specifically, he was talking about shifting procedure and traction control, both of which are usually items of constant fine-tuning in a new track car.

Road Racing Manager Gary Johnson of SRT Motorsports summed it up: "From our standpoint it was a pretty historic day. It was pretty exciting for everybody to see a new Viper GTS-R roll out and go on the track for the first time. I think everybody is excited. Everybody was pretty tired, of course, but everybody was pretty excited. It was an exciting day to see. I think the test was an incredible success. To basically build that car, start it up the first time like the day before and have it run around the whole day and do everything it was supposed to do was a huge achievement.”

Very cool indeed. On a personal note, this writer and another Torque News contributor, Don Bain, will be on a GT track next week with some of the hottest cars in street-level speedsters, including the 2012 Audi R8 (both V10 coupe and V8 Spyder) and the 2013 Ford Mustang for the Rocky Mountain Automotive Press' annual Rocky Mountain Drive Event in Denver, Colorado. We're excited to show our readers some of the hottest cars on and off the road today.