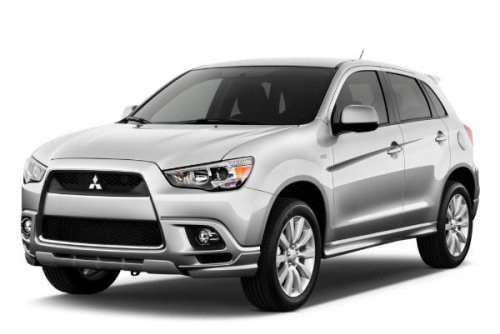 Mitsubishi has re-designed the Outlander crossover and is rumored to have plans for a hybrid option as well. The hybrid, news of which was hinted at last year, will be unveiled later this year and offered for sale in early 2013, according to the company.
Advertisement

The Outlander is an excellent seller in emerging markets like India as well as in the company's traditionally strong markets such as Australia. It has seen marginal success in the North American market. Its design has been flagging and in need of an update, which will also be forthcoming with the 2013 model.

The New Look
Mitsubishi has added sporty lines and a more tapered, less boxy rear profile, taking many hints from its PX concept introduced last year. The front profile has been smoothed to remove some of the aggressive look it once had while the grill work has narrowed and become more smooth.

This sleeker front end includes the same narrow headlamps, but now with a more tapered look, and widened recesses for the optional fog lamps. The rear spoiler remains, but some visibility loss because of the change in taper may affect perception from the driver's seat.

The fenders have smoothed, minimizing the wheel well bumps to further keep the design more updated.

The Hybrid Powertrain
While Mitsubishi has not released any specific information for the 2013 Outlander's mechanics, it will likely take cues from the company's PX-MiEV II concept debuted last year at the Tokyo Motor Show. That upgraded concept contained a 2.0-liter, four cylinder engine with a 6-speed gear box. Two 60 kilowatt (81 horsepower) electric motors were included in the PX as well, utilizing a parallel hybrid (i.e. “plug-in”) setup.

This combination gave the PX an average fuel efficiency of 141.1mpg (U.S., estimated), so a similarly-outfitted Outlander could have close to or over 100 miles per gallon combined. This assumes a plug-in hybrid is the plan for the Outlander, of course. Mitsubishi has only officially said “hybrid” and has not specified which type.

The Outlander's current efficiency ratings are 23/28 city/highway, which is respectable in the crossover genre. A new, hybrid option would mean adding at least 30% to those numbers on the conservative side and possibly tripling them if it's a plug-in, as above. Most likely the real world numbers will be somewhere in between.

Overall, the 2013 Mitsubishi Outlander has definitely been due for a makeover. The new design is much more modern and competitive. A hybrid option will definitely serve to boost the company's green credentials while a plug-in hybrid may make this the most fuel efficient crossover on the market.