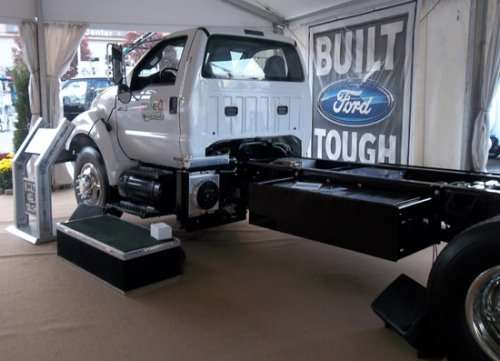 It may not be as hot as a the new Bentley truck, but the F-750 PHEV debuting at the NTEA show is serious business.
Advertisement

Odyne Systems debuted their new F-750 plug-in hybrid conversion at the National Truck Equipment Association show this week, showcasing another heavy-duty vehicle in their lineup of commercial work trucks fitted with advanced fuel-saving technologies. Although the truck weighs more than eight Chevy Volts combined, it is capable of doing the heavy work its typical gasoline or diesel counterpart would do, but with up to 20% in fuel savings.

The Odyne system fits lithium-ion battery packs in either a 14kWh or 18kWh capacity along the rails (see black boxes in photo). An electric motor with about 50hp of output is added to the drive line at the drive axle to act as both a propulsion unit and a regenerative brake. This setup adds some weight to the truck (about three quarters of a ton, or 1,600 pounds), but reduces fuel consumption by up to 1,750 gallons in a typical application's annual use.

The batteries also allow engine idling to be limited, powering most accessories through the batteries when parked. Many work trucks of this size are fitted with boom lifts, cranes, dump beds, and more that are hydraulically-driven. With an electric rather than mechanical hydraulic pump fitted, these applications can run much more efficiently and can use the truck's expanded batteries to do so, saving fuel. Other additions include air conditioning that is electrically-driven, and most power take off (PTO) accessories can be fitted in electric versions.

The trucks are not capable of moving in all-electric mode, as the motor is only 50hp, but the added acceleration boost is noticed immediately by most drivers, thanks to the full torque from the motor available at near-0 RPMs. As with most typical hybrid heavy trucks, this means faster acceleration from a standstill, even under load, and better economy overall.

Ground clearance is preserved with the battery pack's location, and battery recharging can be done at 110V, 220V, or by running the truck's engine. At 110V, battery recharging takes 11 hours for the 14kWh and 22 hours on the 28kWh pack and 3 or 5 hours at 220V. Since most businesses using heavy trucks like this likely have 220V outlets available, often even on work sites, that option is likely to be used often. Charging systems are all built into the Odyne truck fittings. Odyne estimates that the typical return on investment (ROI) for a common F-750 application would be 3-4 years, based on hours of service and reduced fuel and maintenance costs.

The Odyne System PHEV can be fitted to any F-750 platform, including single cab, quad-cab, etc. It can be utilized on any standard engine or fuel option available from Ford and does not change the Department of Transportation ratings for the rig. Although 1,750 gallons annually may not sound like much, according to the Institute for Energy Research, the commercial vehicle sector makes up about 20% of petroleum use in the United States. The majority of commercial vehicles are medium- and heavy-duty work trucks. Systems like this, conversions or factory fits for natural gas, electric drive, and more can all significantly impact oil usage in North America.