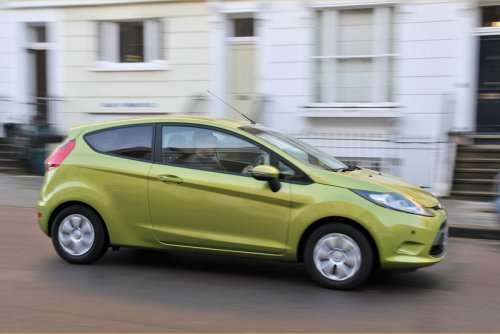 In a competition held annually by ALD Automotive and Shell, this time in Brentwood, Essex in the United Kingdom, vehicles fresh out of the showroom are pitted against one another as professional driving teams from various manufacturers attempt to achieve extreme fuel economy on a real-world driving route.

The route this year was over 370 miles long, winding through South Wales and the Cotswolds. Andrew Marriott and Andy Dawson on Ford's team, both former rally drivers, took the win with more than six miles per gallon over the second place car, which also broke the 100 MPG barrier. Total combined cycle figures for all participants in the Fiesta's category were almost 16 percent higher than the 2011 race.

The Ford Fiesta ECOnetic sold in Europe sports a 1.6-liter TDCi engine has an EU mileage rating of 85.6 miles per gallon and emissions of only 87 grams of CO2 per kilometer. Smart driving, as the Ford team showed, can boost this mileage significantly as their official tally was 108.78 MPG for the win.

Other Ford vehicles in the race included a Ford Focus Titanium 1.0 EcoBoost, which clocked 61.93 MPG, and the Ford Transit Custom T270 placing third in its category with an impressive 56.04 MPG - 37% higher than its EU combined MPG of 40.9.

“Manufacturers have done a tremendous job in improving the fuel efficiency of all news cars and vans, but motorists should see their published fuel consumption figures as a target to beat, not the maximum achievable,” said event organizer Ross Durkin.