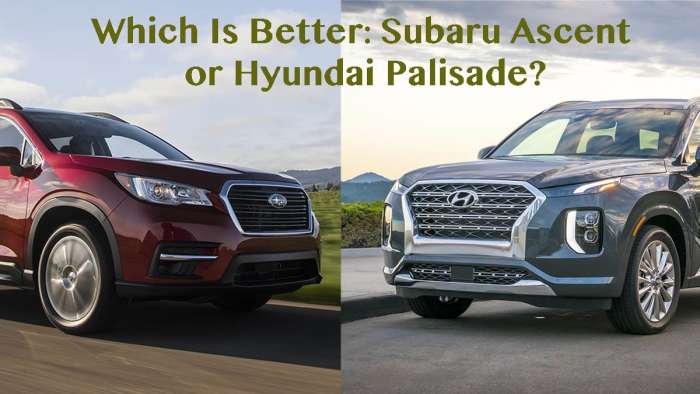 Which Is Better: The Hyundai Palisade or the Subaru Ascent?

In the battle of the third-row SUVs, which is the better choice? The Hyundai Palisade or the Subaru Ascent? See what a major weakness and benefit of each is.
Advertisement

Even as American families grow smaller, the demand for three-row SUVs grows larger: especially affordable models like the Hyundai Palisade and the Subaru Ascent. Which is the better choice – the Subaru or the Hyundai? Let’s take a look at the numbers and a couple of subjective points.

Reliability
Why lead with reliability? It’s a point that too many consumers don’t put enough stock in. They get caught up in the sexiness of powertrains and infotainment systems. Yet, at the end of the day, you want a vehicle that’s going to be in your driveway and not at the service center.

Our Subaru expert Denis Flierl recently wrote about the Subaru Ascent’s reliability. It’s not good to be on a 10 worst list. Denis reports the Ascent 3-Row SUV initially had average reliability, but recent transmission problems, sometimes requiring a replacement, have lowered its reliability score.

The research for the Subaru Ascent came from Consumer Reports, which assigned it a reliability score of 18. The Hyundai Palisade, by comparison, has a score of 65 but its predicted reliability score is 4 out of 5. The 2021 Ascent is scored at 1 out of 5.

The Hyundai Palisade is more reliable than the Subaru Ascent.

Powertrain
OK, so it’s time to address the sexiness of the powertrain. The Subaru Ascent is powered by an all-new FA24 2.4-liter turbocharged Boxer engine developed just for the new three-row family hauler. It comes with 260 horsepower and 277 lb-ft of torque. Power is sent to all four wheels through a continuously variable automatic transmission (CVT).

The Hyundai Palisade’s power comes from an Atkinson-cycle 3.8-liter V6, dual CVVT, direct-injected engine with 291 horsepower and 262 lb-ft of torque. Palisade delivers that power to the wheels via an eight-speed automatic transmission. The Palisade with AWD weighs 150 pounds less than the Ascent, which in my humble opinion, makes the torque numbers a relative draw.

Comparing apples to apples, the Palisade with AWD gets a combined 21 mpg, according to the EPA. The Ascent, which only comes in AWD, is scored at 23 mpg.

The tiebreaker for me is the Ascent has a CVT while the Palisade has an eight-speed automatic. Under full loads, the Palisade is going to be smoother and its larger engine won’t strain as much under acceleration. The Palisade is the better choice for its powertrain. 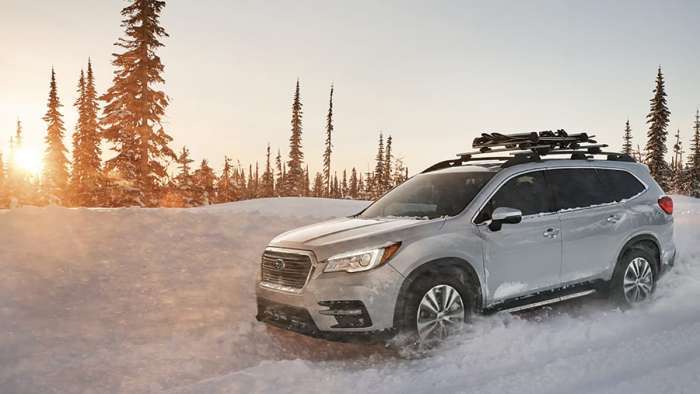 Safety
It’s tough to argue against safety when it comes to Subaru. It’s one of the hallmarks of the brand. The standard EyeSight Driver Assist Technology alone makes it a compelling choice. For 2021, the EyeSight adds advanced adaptive cruise control with lane centering and lane keep assist.

Lets score the Subaru Ascent the winner when it comes to safety. Subaru continues to be the leader in this sector (but that by no means implies the Palisade is unsafe). 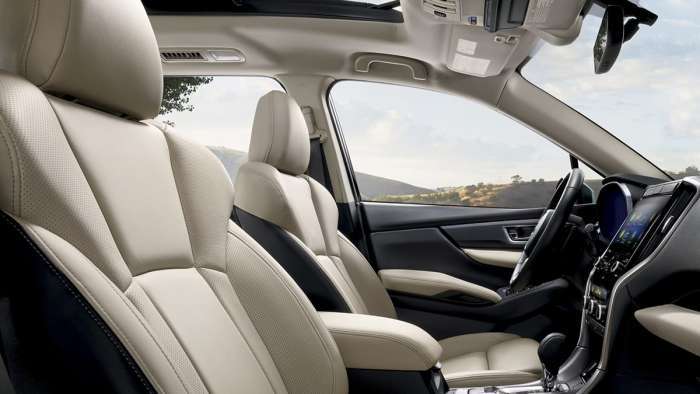 Interior
The Hyundai Palisade has two more cubic feet of passenger volume than the Subaru Ascent. While the Ascent has slightly more front-row headroom, the Palisade has a lot more front-row legroom, which was important to me as a six-footer. Where the Palisade really wins is second-row legroom, with a four-inch advantage. Grownups will like that extra space. Cargo numbers for both models are largely similar.

The interiors of both models are noted for their near luxury-levels of comfort. Both are suitable for long drives. Both have good infotainment systems as well.

Lets score the Ascent as having a slightly better interior just because of its looks. That’s entirely subjective and might be more of my Yankee sensitivities.

Price
The Subaru Ascent with standard all-wheel drive has a base MSRP of $32,295. The Palisde with standard front-wheel drive is priced at $32,525. Throw in all-wheel drive and the price jumps to $34,225. According to this research from U.S. News, you’re more likely to find deals on Subarus with an average price of $30,785 for the Ascent versus $35,263 for the AWD Palisade.

On price alone, the Subaru Ascent is the clear better choice. 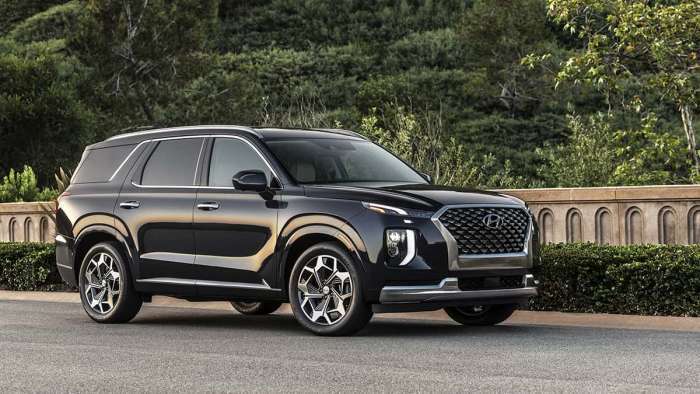 Overall Winner
Based on the five areas focused on, the Hyundai Palisade is a better choice than the Ascent with the higher base MSRP. The ongoing reliability issue continues to be a concern. Plus, the Palisade has a more functional powertrain for hauling people and cargo combined.

Tyson wrote on November 30, 2020 - 1:56pm Permalink
The Ascent has two different tow ratings. The entry level model tows up to 2000LBS and every other model has a 5000LB tow rating - are you comparing the base models of both vehicles or anything but the base models?
Chris Grimm wrote on November 30, 2020 - 2:21pm Permalink
If you're going to compare apples to apples you should take into consideration that the Palisade does not come standard with AWD and will have to pay extra for it. So if you're going to compare an upper level model of the Palisade you should do the same with the Ascent which would increase the tow capacity of the Ascent to 5000lbs.
Foster Bitton wrote on November 30, 2020 - 4:06pm Permalink
Consumer Reports shows 2 recalls for drivetrain issues in the 2019 Ascent. The same issues have not been seen in the 2020 or 2021 models. It appears the reliability ratings are byproducts of the drivetrain problems in the 2019 models, and it will take time for the raters to feel comfortable with the actions Subaru took to address the issues.
Alexandre Bourdon wrote on November 30, 2020 - 9:38pm Permalink
The Ascent reliability is good. The build quality is very smart and refined — no one builds a tight door like Subaru. I went in for the transmission recall, it was not a big deal it was just a sensor test and software update — there are no moving parts in the cvt so it’s very dependent on perfect oil pressure. In my opinion what’s really missing from this review is the responsiveness of the drive and stability. Transmission latency is very low and the ratios give you legs into the 140km/h speed. I just love this car, it’s a snow tank with a sports car turbo engine. Off road dream. It’s Subaru’s prototype super car, this engine will be upgraded in 2022 to deliver 400hp. I often wonder if Subaru is just really honest about performance stats :)
Steve Ballenger wrote on December 1, 2020 - 8:51am Permalink
Well, the author can certainly make this review work for him by picking and choosing the numbers that he likes. I almost choked on my coffee when he quoted a 2000 lb towing capacity for the Ascent. Most Subaru buyers don't even bother with the base model Ascent because the incentives and bundling is so good in the higher trims. So biased media is creeping into car reviews these days? Nice try though....