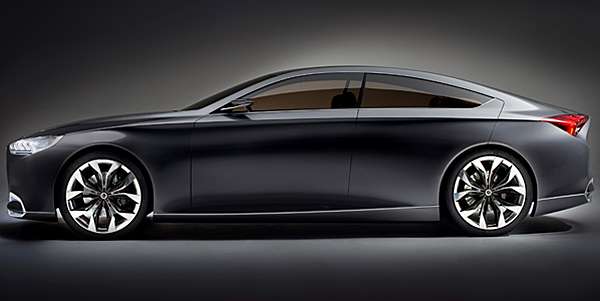 What the Coming 2015 Hyundai Genesis Coupe Must Have

There's been a lot of attention on the 2015 Hyundai Genesis that debuts in Las Vegas at the Consumer Electronics Show on Jan. 6 but what about the coupe version? If a 2015 Hyundai Genesis coupe is coming - and appears it will in the next five months - it better be packed with the right things.
Advertisement

Most surprisingly, the 2015 Hyundai Genesis Coupe is not going to need everything the sedan does but there are some touches that are going to be an absolute must. Not having them would render the coupe totally ineffective.

The V6 engine is going to be fine for people who lament the fact that there is not currently a Nissan Altima coupe. But it's the V8 that is going to make the Hyundai Genesis Coupe a true world beater.

Using decidedly unscientific estimates (consider them good guesstimates) a 2015 Hyundai Genesis Coupe with the sedan's V8 engine is going to produce about 444 horsepower and still a relatively measly 376 lb. ft. of torque.

Of course, the Corvette has about 84 lb. ft. more of torque, which means the Genesis Coupe is going to be staring at a lot of Corvette tail lamps (an admittedly beautiful view). However, you would probably be spending about $12,000 less for a fully contented 2015 Hyundai Genesis coupe and that could be something lots of people could consider for a hot performance coupe.

After all, Hyundai has safety cornered. Now it's time to come out with a Nürburgring blistering coupe.

Along those same lines, especially if Hyundai gets optimistic and benchmarks the 2015 Genesis Coupe against the Audi A5, make that Audi S5, it's absolutely going to have to import the all-wheel drive platform of the Genesis sedan. That would make it a much better handling car than the Corvette in my opinion.

Let's look at the HCD-14 Genesis Concept (pictured above) that was introduced at last year's Detroit Auto Show for a real radical idea. How about a three-door version of the Genesis Coupe, along the lines of the Veloster? I think that would be a styling gamble that would pay off immensely. Plus, it would give the coupe proportional doors that are lighter weight.

Of course, I'm not sure what the reception would be for racing. It might affect structural rigidity to have the doors split into that three-door combination.

Here are some of the other features from the Genesis sedan that the Genesis coupe must have if it's going to be a near-luxury, high performance model:

Chase Gregory wrote on December 16, 2013 - 12:19pm Permalink
Where is the picture of the coupe? 2doors right? The front end of this concept here looks like a new Lexus, and the back end looks like an Audi A7. IMHO, the V8 will help save this car from the scrap yard.
Chris C wrote on January 27, 2014 - 1:36am Permalink
Another derrivative comment about car A looking like car B. Lol As if you guys expect a car to look like a damn mars rover? It's called a trend. Given any one era of automotive designing, all cars of that era will have a distinct look. For example compare cars from the 50's and card from the 70's. It's nothing new. And if you think that premium brands don't copy design cues from second tier brands, you are mistaken. Damn me for not being able to think of examples right now, but I see it all the time. Except with premium cars, they copy little subtle things.
Mike wrote on December 23, 2013 - 1:45pm Permalink
The average Corvette buyer is somewhere between 65 and deceased and won't be cross-shopping the Genesis. One thing that would definitely get attention is a DCT.
Stacy King wrote on January 10, 2014 - 7:50pm Permalink
Send more info on the Genesis Coupe. It is the best dollar for dollar whip out there.....
R W Marsh wrote on June 6, 2014 - 2:19pm Permalink
I'm over 65 and SMART enough to understand that after having 5 vettes over the years its time for the look of something that the 30-40 age group may not be able to afford.....did you say that you accept cash? Send me any up dates that state when this thing show up at a dealer. Genesis Coupe only. PS still kickin!!